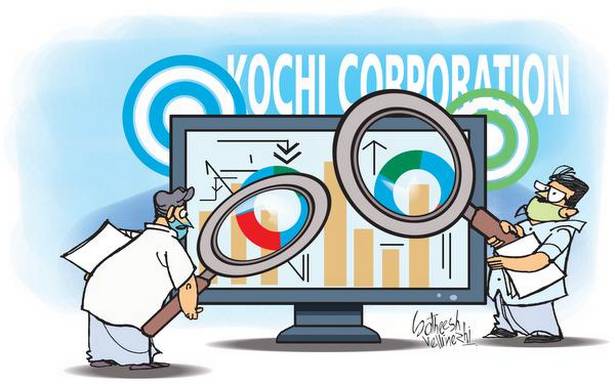 The Left Democratic Front (LDF), which governs the Kochi Corporation, rates 2021 as a year of all-round success despite lacking a clear majority, while the United Democratic Front (UDF) in the opposition cannot disagree more.

The Hindu spoke to Mayor M. Anilkumar and opposition leader Antony Kureethara on how the Corporation fared this year. While Mr. Kureethara gave the Corporation a dismal two out of ten marks, Mr. Anilkumar said that though he was satisfied with the performance despite the challenges posed by the pandemic and lack of a clear majority, he would rather leave the rating to people before adding that people probably gave their verdict clear in the Gandhi Nagar by-election where the LDF enhanced its victory margin to over 700 votes.

“The previous UDF council had to drop the proposal for biomining of waste at Brahmapuram plant for ₹16 crore in the face of opposition from the LDF, which is now going ahead with it at an inflated ₹70 crore,” said Mr. Kureethara.

Mr. Anilkumar countered that waste management improved with the appointment of squads for cleaning up roads and fining offenders. “We cleaned up 10 acres at Brahmapuram where a temporary plant will be set up shortly. The UDF should introspect why it was indecisive about biomining despite having a clear majority,” he said.

e-governance, which was supposed to decentralise service delivery, has failed despite the investments in zonal offices, forcing people to visit the Corporation office often. Tax collection is in doldrums with tax receipts being issued in violation of the Municipal Act enabling many to take advantage of the chaos to secure stays from the court,” alleged Mr. Kureethara.

The Mayor said that tax collection was never foolproof in the Corporation, and that the introduction of plinth area-based taxing coupled with e-governance was a step towards addressing the issue. “e-governance has enabled the Corporation to start issuing death and birth certificates online from November. Tax collection for buildings assessed prior to 2013 will start from February, while steps are being taken to clear the complications caused after an IT major that run the system abandoned it,” he said.

Mr. Kureethara accused the Mayor of demanding an exorbitant ₹40 crore for the completion of the Corporation’s new building despite the previous council having got it 90% completed. “The entire estimate needed for the completion of the new Corporation building will be placed before the finance committee in keeping with the opposition demand and the council will be taken into confidence,” said Mr. Anilkumar.

Mosquito menace, disruption of assistance to the elderly under Vyomithram project and dumping of waste along roads continue to mar the health sector, Mr. Kureethara said. “The year also saw court intervention in the day-to-day activities of the Corporation, from waste management and town vending zones to drinking water issue like never before,” Mr. Kureethara alleged.

The Mayor claimed that the biggest success was achieved in the health sector by successfully withstanding the devastating second wave of the pandemic and delivering food on doorsteps during the crisis period.

An unprecedented system of monthly review of the health sector in the presence of all stakeholders has also been put in place, the Mayor said.