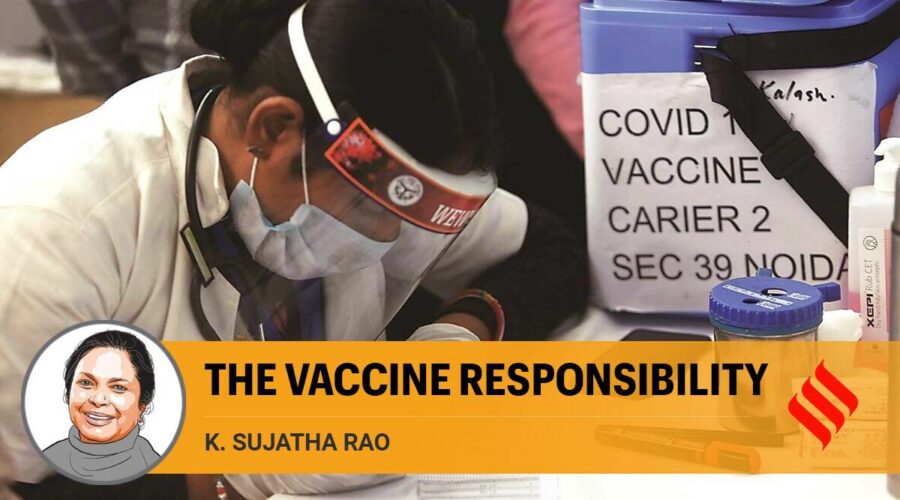 What is interesting about the current political economy discourse is the tendency to treat central grants as belonging to “the GoI” as separate from “them” the states, even though the money spent is from the direct and indirect taxes paid by the people. 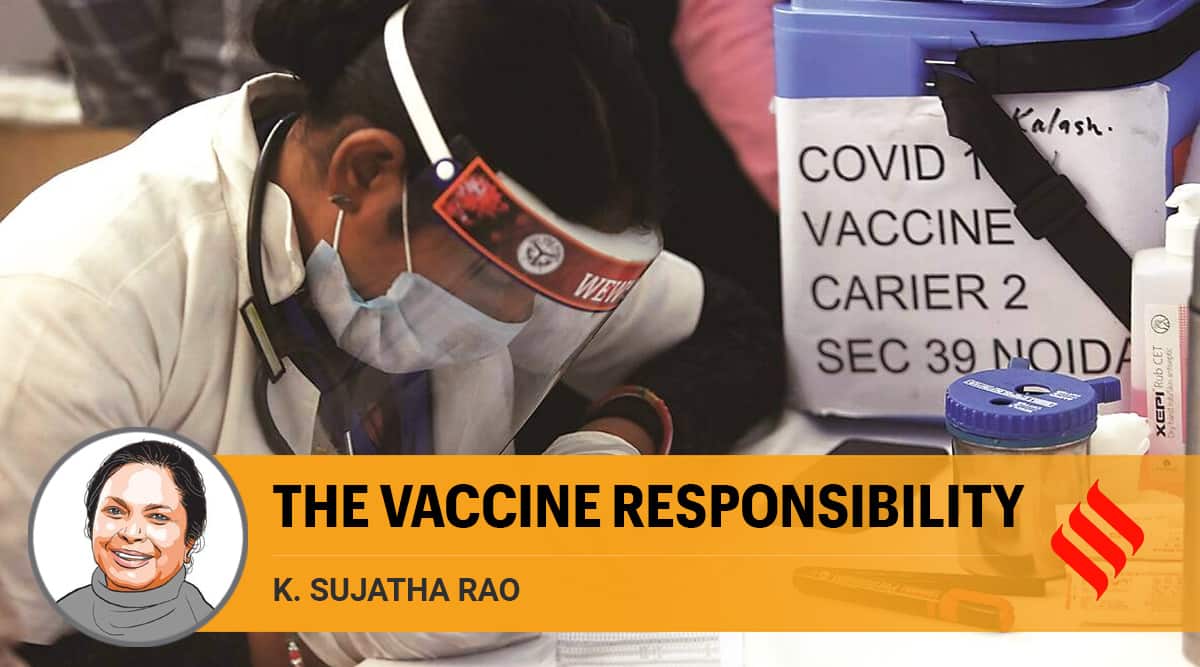 In traumatised India, saving lives has become the highest priority to be achieved by vaccinating 70 per cent of the adult population or 654 million people. This article seeks to analyse the implications of the new vaccine policy announcements on April 20.

In the past three months, only 40 per cent of the 30 crore high-risk population were vaccinated, partly due to the initial vaccine hesitancy and later vaccine shortage. As mortality data of Wave II shows 44 per cent deaths among 20-50 years, the government has expanded eligibility criteria to include all adults from May 1. This expansion in the context of another 60 per cent target population yet to be vaccinated with a single dose, and uneven supplies, will result in distortions and inequities, with the more vocal and assertive in urban areas getting access rather than the powerless and vulnerable in rural areas and urban slums.

India’s monthly COVID vaccine manufacturing capacity is about 60-65 million doses — 60 million by Serum Institute of India (SII) and 1-5 million by Bharat Biotech (BB) against our final requirement of 1.45 billion doses to cover 70 per cent adults. India’s failure to firm up advance purchase agreements with other vaccine producers or move with alacrity with the Sputnik application is attributed to a mistaken notion that SII and BB would be adequate for India’s needs. Clearly, a detailed demand-supply analysis would have enabled a more calibrated expansion of the eligibility criteria. Government has announced three important decisions: One, earmarking 50 per cent of the capacity for GoI, the rest for the open market; two, waiving bridging studies for market entry of foreign players; and three, astonishingly, permitting companies to set the price. The utilisation of the vaccines by the GoI is unclear — are they for states and if so how much and on what terms, or for vaccine diplomacy, and from which quota will the foreign obligations be met.

With every state individually contacting the suppliers and bargaining price and supply, the discretion will be with the supplier — who to sell to, when, where, how much and at what rate. This will undoubtedly create interstate inequities, where the poorer states will stand to suffer due to poor bargaining power, while the better off may end up paying higher rates but at the cost of sacrificing the already underfunded welfare programmes.

Recently, the SII and BB announced their pricing policy — Rs 400 and Rs 600 per dose for the state government and Rs 600 and Rs 1200 for private parties respectively. The SII vaccine is available in European markets for Rs 161 per dose, Rs 210 ($3) per dose for GAVI and will be provided at Rs 150 to the Central government. The third entrant is Sputnik that proposes to start production in June and is considering charging Rs 750 per dose.

The CEO of SII also made three interesting admissions in interviews — that though the Rs 150 per dose gives normal profits, the intention is making super profits; that his (not the nation’s) first priority will be to supply vaccines to Maharashtra; and third, most worryingly, the private sector will emerge as the main provider of vaccinations in the country, not the state governments.

Pricing is dependent on actual cost of inputs, expenditure incurred on clinical trials, sales promotion and small profit. For SII, investment has been minimal since the development costs have been borne by Oxford University and AstraZeneca. Government has also extended emergency authorisation, besides Rs 3,000 crore as grant/advance purchase amount, in addition to the USD 300 million already received from GAVI to expand vaccine production. Though the GAVI grant was given six months ago, SII does not seem to have expanded its production. It has now promised to manufacture 100 m doses per month by July end. How much of this will be available for India is unclear.

Bharat Biotech’s Krishna Ella is on record that he might have spent about Rs 350 crore for development of the vaccine that includes Phase 3 trials. With the Rs 1,500 crore grant support from the Centre, BB hopes to expand production to 700 million doses per year from the current level of 60 million.

Over seven states have announced their willingness to procure for ensuring free vaccination to their people. So, while UP and Bihar do not even have decent laboratories, instead of spending their resources on building their shattered health delivery system, they will be spending an estimated 0.47 per cent and 0.6 per cent of the SDP respectively for providing free vaccines.

What is interesting about the current political economy discourse is the tendency to treat central grants as belonging to “the GoI” as separate from “them” the states, even though the money spent is from the direct and indirect taxes paid by the people. This is strange thinking as the Central government is legally obligated to control the “interstate spread of infectious diseases” (Entry 29 of the Concurrent List under Schedule VII of the Constitution). Assistance to states to combat such diseases is its fundamental duty. It is under such an understanding and because of the wide externalities that infectious diseases entail, that the Centre has always procured vaccines and other consumables for states under all National Infectious Disease Control Programmes.

Besides, such an arrangement also makes economic sense. In centralising procurement and being the sole buyer, government gets the market power to obtain highly competitive rates and ensure robust quality assurance processes and coordinate supplies based on transparent objective criteria. Secondly, government also has the power to cap prices of all essential drugs, based on the costing carried out by the NPPA.

With the incentives offered to foreign players, there is now a more competitive environment. In the event of attempts at cartelisation, government can invoke compulsory licensing and expand production through the 18 manufacturing companies in India, boosting availability at an administered price. Simultaneously, GoI should aggressively take up with the US to support its demand for waiver of the IPR on vaccines and help expand its availability at affordable prices. In other words, an intelligent use of authority by the GoI can halve the estimated expenditure of about Rs 60,000 crore and ensure a more efficient utilisation of the saved funds to strengthen health systems.

The next two years will be difficult. This is not the time to create monopolies and allow profiteering. Instead, this is the CIPLA moment when it took on the MNCs and crashed the market of HIV/AIDS drugs from USD12,000 to USD300 per person saving millions of lives round the world. Needed is a commitment to peoples’ welfare.

This column first appeared in the print edition on April 27, 2021 under the title ‘The vaccine responsibility’. The writer is former Union health secretary.

04/27/2021 India Comments Off on It is Centre’s duty to assist states to combat Covid-19. It also makes economic sense
India