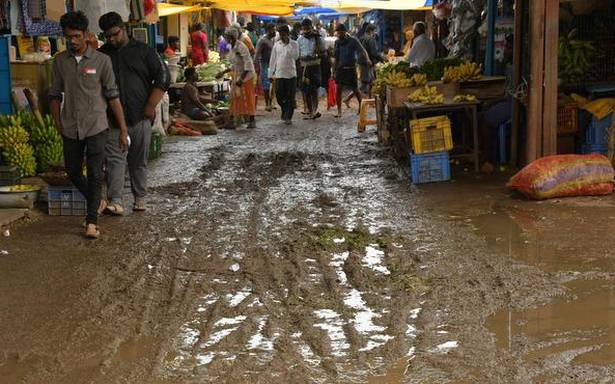 Gandhi Market in the city has returned to its old ways.

Gandhi Market was reopened on November 28, after the Madurai Bench of the Madras High Court lifted an interim order against its reopening. The district administration laid down a set of norms to be followed by vendors and customers. They included social distancing, wearing face masks and avoiding overcrowding at shops.

Vendors were told to confine their ware to their shops, while sellers on the main road were evicted and asked not to return. However, all these norms are up in the air as vendors flout them on a daily basis, customers say.

“Even those who enter the premises with a face mask pull it down to their chin to scan the produce and purchase it,” said P. Muthu, a customer.

The crowds swell through the day to make purchases from the retail vendors, while trucks carrying loads for wholesale sellers block the streets at night. “There is no restriction on the number of customers, nor is there any official to monitor the vendors and customers,” he added.

The market is in a terrible state, with pathways filled with mud and slush. “The civic body said it would regularly clean up the area and keep it neat. Our customers are put off by the slush and some return without buying anything,” a vegetable seller said.

The civic body cleared up nearly 110 tonnes of garbage and constructed stormwater drains at the market prior to its opening. “The drains are too small and have clogged up. There was no drain for the water from the recent rains to clear out. It paints us in a bad light, but it is the shoddy work of the city corporation that is to be blamed,” another vendor said.

Meanwhile, a senior official of the civic boy says another eviction drive is on the cards in the area. “We plan to remove the encroachments within and on the periphery of the market. A more permanent solution to ensure their non-return will taken along with city police,” he said.