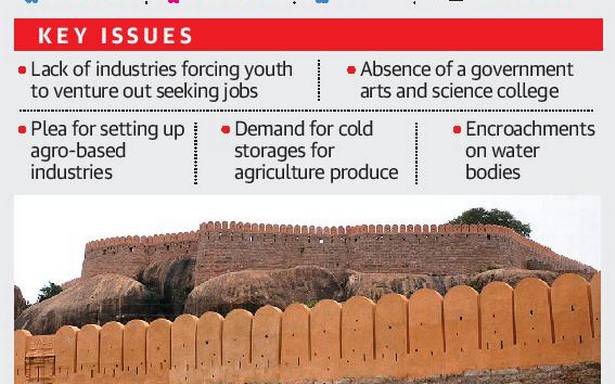 The constituency has not witnessed any significant development over the years

One of the backward regions in Pudukottai district, the Tirumayam Assembly constituency is witnessing a close contest between two sons of the soil from the two major Dravidian parties.

Former Union Minister and sitting Dravida Munnetra Kazhagam MLA S. Regupathy is in the fray for the second consecutive time from this constituency locking horns with the AIADMK candidate P. K. Vairamuthu. This is the third consecutive time that Mr. Vairamuthu has been given the ticket by the party high command to contest from the same constituency from where he won in 2011 but tasted defeat in 2016.

Encompassing three unions- Tirumayam, Arimalam and Ponnamaravathy- the Tirumayam constituency is essentially a rain-fed region where agriculture is the main vocation. “Waterbodies get filled up only where there is a good spell of rain forcing the farming community to depend on borewells for cultivation of crops. This has resulted in a sharp drop in groundwater table to about 200 feet over the years worrying the farming community of this drought-hit constituency,” says P. Puviarasu, a resident of Ponnamaravathy.

Tirumayam, a town of religious and historical importance housing the famed Sri Sathyamurthi Perumal Temple which is one of the 108 Divya Desams, has been facing drinking water problem for long, forcing the residents to purchase packaged water, says M. Kulandairaj, the district president of Neer Nilai Mattrum Sutru Soozhal Paadhugappu Vivasaya Sangam.

Encroachments in waterbodies and streams have persisted in various places in the wake of official inaction. Large extent of farm lands have turned into real estate plots due to absence of good spell of rains for several years. Irrespective of the party affiliation, the next people’s representatives should ensure that encroachments in waterbodies should be removed to protect the farming community and the people at large, he says.

Barring the BHEL Power Plant Piping Plant at Tirumayam which went on stream in 2013, there is no industry in the constituency necessitating the educated youth to venture out for greener pastures. Many from in and around Ponnamaravathy areas have left for Tiruppur to work.

The absence of a government arts and science college at Tirumayam or anywhere in the constituency has been felt for long. Youth have to travel to Pudukottai or neighbouring Sivaganga district for higher education. The constituency has not witnessed any significant development over the years and continues to remain a backward region in Pudukottai district, claims Mr. Puviarasu.

Both Mr. Vairamuthu and Mr. Reghupathy, who is also the DMK south district in-charge, are well-known faces. Mr. Regupathy had won from the same seat two decades ago in 1991 when he was in the AIADMK then and went on to become a Minister in the Jayalalithaa -headed cabinet at that time. Later, he switched over to the DMK and became a Union Minister of State for Environment and Forests during Congress-led UPA regime. The 2016 elections at Tirumayam turned out to be a very close contest between Regupathy and Vairamuthu. After a stiff fight Mr. Regupathy managed to win by a very narrow margin of 766 votes.

The entry of K. K. Selvakumar, founder president of the Veera Mutharaiyar Munnetra Sangam who is contesting as an Independent candidate is being seen as interesting development in the upcoming electoral battle at Tirumayam given the sizeable population of Mutharaiyars across the constituency.

In all, 22 candidates, including Amma Makkal Munnetra Kazhagam and Makkal Needhi Maiam, are in the race, which could end in a photo finish this time too.