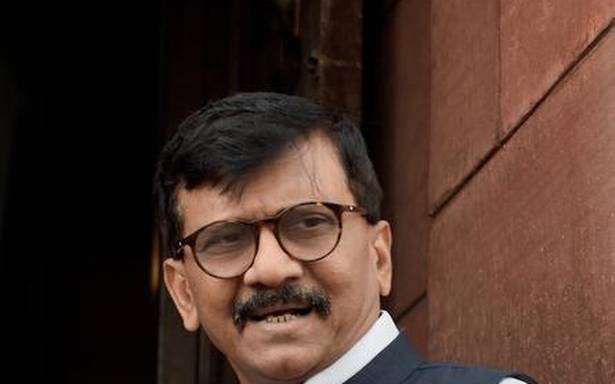 As a retired judge would be monitoring the inquiry, there is no need for removing Anil Deshmukh from his post, says the Shiv Sena leader

He made the statement while speaking to reporters in New Delhi.

"The issue of that letter (written by Singh) is now over for the MVA government. Home Minister Anil Deshmukh has also welcomed any inquiry into this matter," Mr. Raut said.

"Chief Minister Uddhav Thackeray and Anil Deshmukh were of the opinion that an inquiry be set up to probe the claims made by Mr. Singh in the letter. As a retired judge would be monitoring the inquiry, there is no need for removing Mr. Deshmukh from his post," he said adding there is no precedent for it.

It would be clear who tried to malign the image of the State, the Shiv Sena MP said.

Mr. Singh had sent an eight-page letter to Mr. Thackeray on March 20, claiming that Mr. Deshmukh wanted police officers to collect ₹100 crore monthly from bars and hotels. However, the Minister had refuted the allegation.

Mr. Raut also criticised Maharashtra Governor Bhagat Singh Koshyari for not taking any decision on the names of 12 candidates recommended by the state cabinet for their nomination to the Legislative Council from his quota.

"Is the governor doing PhD on those 12 candidates? Does he want to achieve a record of sitting on the names for maximum number of days? He is not respecting the constitutionally-recommended names of 12 candidates," he said.

Reacting to a query related to a Maharashtra BJP delegation meeting the governor on Wednesday, the Shiv Sena Rajya Sabha member said, "The opposition in Maharashtra should respect their post and duty. The opposition leader should act seriously, otherwise people will call them fools. They would become a laughing stock." The BJP delegation led by Devendra Fadnavis met the governor on Wednesday and submitted a memorandum, urging him to seek a "status report" from the State chief secretary on the law and order situation in the State.