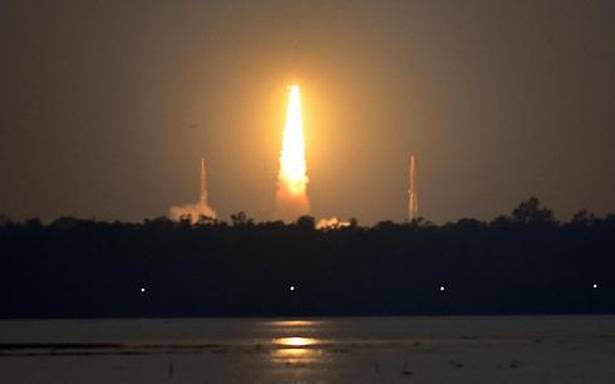 In a pre-dawn launch on May 22, RISAT-2B, the country’s newest microwave Earth observation satellite, rode to its orbit 557 km above the ground.

Data that will come from the all-weather, day and night satellite are considered to be vital for the Armed Forces as also agriculture forecasters and disaster relief agencies.

In a post-launch address from the Sriharikota launch port, K. Sivan, Chairman of the Indian Space Research Organisation(ISRO), hailed the event as a textbook launch of a very important and complex satellite.

Dr. Sivan, who is the Secretary, Department of Space, also announced that the Chandrayaan-2 lander-rover mission would take place during July 9-16.

The high resolution Cartosat-3, the first small satellite launch vehicle and the second test of a future reusable launch vehicle would follow from Sriharikota in the coming months.

The 615-kg RISAT-2B took off at 5.30 a.m. on the PSLV-C46 launcher. About 15 minutes later, it reached and started orbiting in the planned position in space, with an inclination of 37°.

The new satellite "will enhance India’s all-weather (space-based) capabilities in agriculture, forestry and disaster management," according to ISRO.

Realised on a fast track in 15 months at the U R Rao Satellite Centre (URSC) in Bengaluru, RISAT-2B is built to work for at least five years.

Its X-band synthetic aperture radar can give added details such as size of objects on Earth, structures, movement and change. The information will complement data from the normal optical remote sensing satellites. Such data are useful for agencies that need ground imageries during cloud, rain and in the dark.

This is the third Indian RISAT in ten years, coming up after the Israeli- built RISAT-2 in 2009 and later ISRO- built RISAT-1 in 2012. The older two have reached the end of their lives.

ISRO has planned a series of radar imagers in the coming months to enhance its space based observation of Earth and the Indian region.

The current PSLV-C46 was designed in its core alone version minus the strap-on motors. The space port about 100 km from Chennai and located in coastal Andhra Pradesh has handled a total of 72 missions including the GSLV and the GSLV Mark III before this.