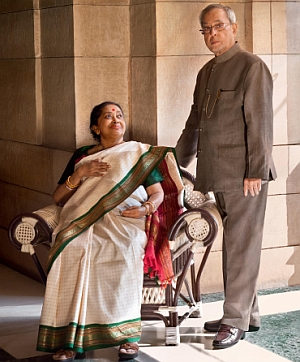 Very rarely does one get a glimpse inside the architectural marvel that is Rashtrapati Bhavan. Ashoka Hall was originally used as a ballroom. The central mural on the ceiling was presented by the Persian ruler Fateh Ali Shah Qajar to King George IV. In 1929, it was presented to the Viceroy of the time, Lord Irwin.

The paintings around the sides were commissioned by architect Edwin Lutyens and executed by Indian painters. Balconies overlook this grand hall, influenced by the palaces around India where queens watched important public proceedings behind the purdah.

The carpet, with a cypress pattern, was woven by carpet makers from Kashmir. The only piece of period furniture in the wood-paneled bedroom is the chair with a backrest carved in the pattern of a spider’s web, designed specially for this house. The bed, tables and lamps are later additions. The President’s personal study is on the ground floor, and looks out on the expansive garden. The ceiling is painted in intricate patterns, and from it hang equally intricate chandeliers.

The glass-fronted bookshelves house rare volumes. The elaborate, handwoven carpets — woven in the early- to mid-1920s in Kashmir — cover the patterned stone floors.