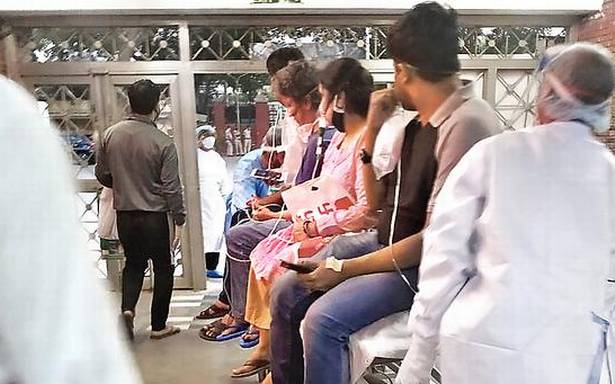 Nearly 20 people on oxygen support gasping for breath, doctors urgently providing CPR to a woman in her 70s, four people on oxygen support squeezed into a single stretcher, and one Chief Medical Officer (CMO), in a green hospital gown, trying his best to attend to all patients in critical conditions. The scenes that rolled out in the emergency room of the largest Delhi government-run COVID-19 facility, Lok Nayak Hospital, were heart-wrenching.

Around 5.45 p.m. on Friday, the CMO checked the oxygen levels of a man, who seemed to be in his fifties, using an oximeter and spontaneously raised an alarm. In a jiffy, he was moved into a wheeled-stretcher. A separate oxygen cylinder was taken out for him, for his oxygen levels were dangerously low.

His oxygen mask was changed to an upgraded variety, a drip was started, and medicines were administered through an inhaler. “Stay awake, stay awake,” the CMO kept telling the patient, tapping gently in his cheeks. Doctors and nurses, clad in PPE kits, helped the CMO as he held the patient’s face from both sides.

Almost every patient was getting oxygen from cylinders. The transparent cables from the cylinders were split using green-and-blue connectors to give oxygen from one cylinder to several patients.

“Doctor, please see her,” a shout of help reeled out in the room at around 6.20 p.m. An unconscious woman, seemingly in her seventies, was wheeled into the emergency. The CMO checked her pulse and immediately started giving her CPR. Amidst all the bustle, about 12 patients, who were relatively less critical but were on oxygen, shared six beds. Some of them found breathing difficult.

“Whose patient is this?” yelled a staff. There was no response. So he picked up a black microphone and repeated the question.

The room was noisy with calls and shouts from about 25 people, mostly doctors, nurses and nursing orderly in PPE kits. The clunky ceiling fans and some mounted fans added to the noise. Suddenly shrieked an announcement from the mike. “Attendants ko bahar karlo [Get the attendants out of here].”

Around 6.25 p.m., just outside the glass door of the emergency room, a woman started crying with folded hands. “Please help our patient,” she pleaded. A stretcher attached with an oxygen cylinder was rolled in from another room for the patient.

As the CMO juggled between calls from senior doctors on his two phones and attending patients, he checked the man in his fifties again. His condition had slightly improved.

Around 6.40 p.m., relatives of a patient walked in with the patient and demanded treatment, furnishing some recommendations. The CMO checked the patient’s details and stared at them. “Should I save him right now [the man in his 50s] or your relative? See his oxygen levels,” he told them, gesturing at the clip pad on which his oxygen level was marked.

Around 6.45 p.m., the glass door opened and four people, who were breathing oxygen from a single cylinder, were shifted out in a single stretcher to another area by PPE-clad staffers. Meanwhile, the rush, shouts, and gasps for breath continued in the emergency room with white walls and grey-and-green flooring.

04/23/2021 India Comments Off on Inside Lok Nayak Hospital: mad rush, cries and gasps for breath
India