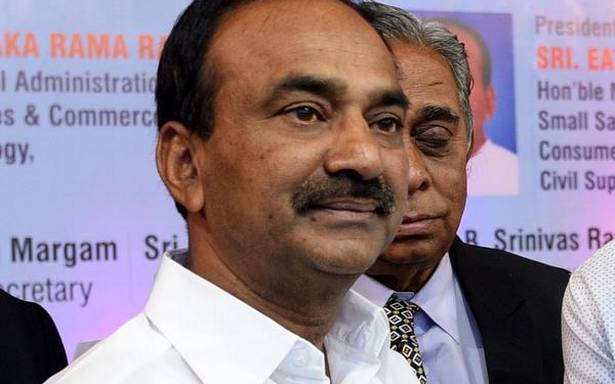 The probe this time around is on large scale encroachment and illegal transaction of land belonging to Sree Seetha Rama Swamy temple at Devarayamjal in Shamirper mandal of Medchal-Malkajgiri district.

Telangana Government has ordered an inquiry into alleged land grabbing by former Minister Eatala Rajender and his supporters even as a detailed probe into another land grabbing charges against Mr. Rajender is underway.

The probe this time around is on large scale encroachment and illegal transaction of land belonging to Sree Seetha Rama Swamy temple at Devarayamjal in Shamirper mandal of Medchal-Malkajgiri district. Chief Secretary Somesh Kumar, in the orders issued on Monday, said that the Endowments department was claiming that as much as 1,521 acres and 13 guntas of land belonged to the temple and a couple of vernacular dailies extensively reported about the encroachment of the temple lands by Mr. Rajender and few other individuals.

These individuals unlawfully occupied said lands in their own names as well as in benami names. “It is reported that the value of the encroached lands is more than Rs. 1,000 crore and the temple has been defrauded of such high value properties,” the order said. It had also been reported that large constructions had been made on these lands without any valid permissions and in flagrant violation of several laws.

“Besides gravely hurting the sentiments of the devotees and donors, it is alleged that these actions constitute grave violations of several laws in force,” the Chief Secretary said in the orders. It was accordingly decided to order a detailed inquiry into the issue by a committee of officials. The committee would be headed by Panchayat Raj Commissioner M. Raghunandan Rao and would comprise of collectors of Medchal-Malkajgiri (Sweta Mohanty), Mancherial (Bharati Holikere) and Nalgonda (Prasanth Jeevan Patil) as its members.

The committee should conduct detailed inquiry into the details of encroachers and land encroached upon, the nature of encroachment and present usage, documents possessed by these encroachers and permission, if any, given by any Government body. The committee would also examine violations of existing government regulations, extent of vacant land, the extent of land under encroachment by the benamis and influential persons behind them and extent of revenue loss to the temple and recommend action that should be initiated.

The Chief Secretary has asked the committee to submit its report at the earliest.