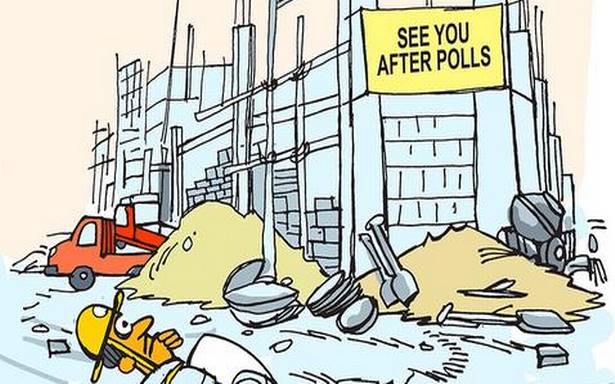 Labourers from West Bengal, Assam have gone home to exercise their franchise

Kabir Ahmad (name changed), a migrant worker in Perumbavoor, had to spend a small fortune on a flight ticket to return home to Hojai district of Assam last month following his parents’ anguished plea to get back in time for voting. Their desperation was borne out of the perceived danger posed to the community by the National Register of Citizens (NRC) proposed by the Union government and the cost that each wasted vote may entail in the fight to keep the legislation at bay. Though not fully convinced of their anxiety, Kabir, who has been in Kerala for over a decade and speaks fluent Malayalam, did vote in the election held on April 1.

The State elections to the Assemblies of West Bengal and Assam seem to have assumed unprecedented significance among the sizeable migrant communities from these two States in the wake of the NRC and its potential implications, leading to their mass exodus back home despite having returned here after considerable struggle in search of jobs following the COVID-19-induced lockdown.

Plywood, construction, and hospitality industries in the State have been seriously hit following their exit. “The production in plywood industry dropped by about 40%. The migrants from the religious minority community fear that if they do not turn up to vote, the local politicians may abandon them,” says Mujeeb Rahman, State president, All Kerala Plywood and Block Board Manufacturers Association.

“There is a definite fear psychosis among the migrants from the religious minorities in the northeastern States and West Bengal reflecting in the unprecedented interest in the Assembly elections. Those from the religious minority community perceive it as a vote against the implementation of the NRC and those from the majority community as a vote for it,” says Benoy Peter, executive director, Centre for Migration and Inclusive Development.

The hospitality industry, which is heavily reliant on migrant workers from the northeast and West Bengal has also felt the pinch. “Most of our major clients are facing difficulties and there seems no permanent solution in sight. Our attempt to fill the gap by bringing in migrants from Odisha has failed in the face of large-scale attrition,” says T.R. Krishnakumar, director of business development, KLR Facility Management Private Limited, which supplies human resource to major players in the industry.

The pineapple sector too has witnessed a sharp fall in the number of workers though the price of the fruit has gone up to ₹40 a kg after a year-long slump. Around 25,000 workers from other States work in the sector and about 20,000 are from Assam and West Bengal. Most of these workers have gone back for the elections, said Baby John, a pineapple farmer in Vazhakkulam. Shine Kallungal, a pineapple farmer in Muvattupuzha, said there was a severe shortage of hands in the sector, which would affect farmers’ returns.

The same level of desperation is, though, not seen among the migrants in Tamil Nadu, which is also going to polls. Besides, being the oldest migrant community in the State, many now will vote here, like 38-year-old Murugeswari, who moved into Vathuruthy in Kochi from Dindigul over a decade ago.

04/04/2021 India Comments Off on Industry hit in Kerala as workers from West Bengal, Assam leave for voting
TV & Movies