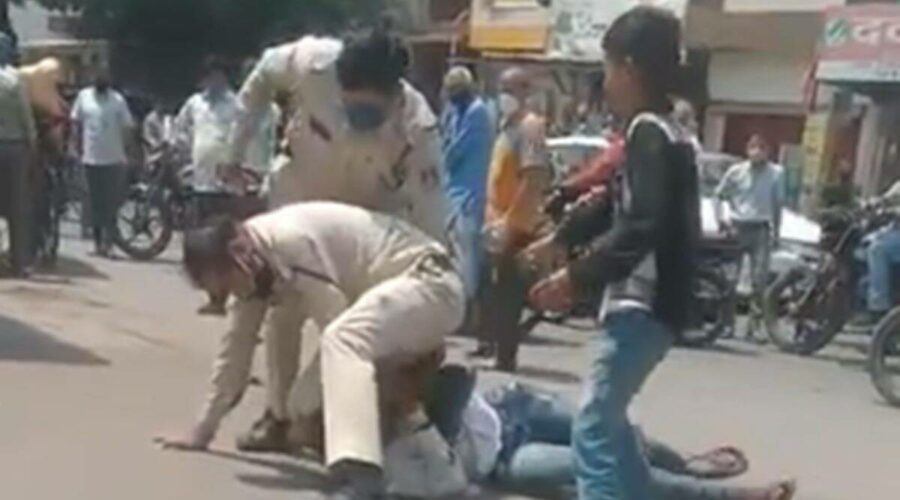 Speaking to The Indian Express, Ashish Bagri, SP East, said that while the police did not endorse the actions of the two constables, their response to the situation was not without provocation. Two constables of Pardeshipur police station in Madhya Pradesh’s Indore were suspended late on Tuesday night after a video of them beating an autorickshaw driver for allegedly not wearing a mask properly went viral on social media. The video shows the policemen trying to force the driver, identified as Krishna Kunjir, to go to the police station.

Earlier on Tuesday, the two policemen who were deployed at Malwa Mill Gate stopped Krishna, apparently to ask him why he wasn’t wearing his mask properly — the mask had slipped down his nose. Krishna reportedly explained that he was heading to a hospital to meet his ailing father, but the cops asked him to come to the police station instead. The video shows that after Krishna refused, a scuffle ensued, and he was pinned to the road while the cops tried to drag him to the police station. It is also alleged that Krishna attacked the two policemen when they tried to book him for violation of Covid norms.

According to reports, Krishna’s son stood beside, wailing and pleading with the cops to not beat up his father.

Speaking to The Indian Express, Ashish Bagri, SP East, said that while the police did not endorse the action of the two constables, their response to the situation was not without provocation. “When he was stopped by the two policemen, he held their collar and even slapped one of them, after which he was being taken to the police station for further action,” Bagri said.

Bagri also pointed out that the initial portion of the incident, when the cops were allegedly assaulted, was not captured on video, or edited before it was posted on social media. The police further said Krishna has a criminal record, and could be seen in a separate CCTV footage damaging parked vehicles using a sharp weapon.

Bagri said an inquiry had been ordered into the incident. “An inquiry is underway against the two policemen and stringent action will be taken if they are found guilty,” he said.