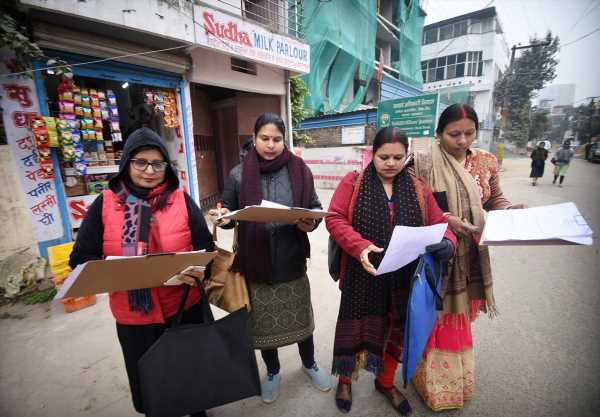 ‘They fear their caste privilege will be exposed if there is an OBC caste census.’

The last published census for the Other Backward Castes was in 1931, which said that OBCs then numbered 52 per cent of India’s population.

In post-Independence India, this practice was discontinued because the then prime minister Jawaharlal Nehru found it inappropriate to count India’s population on the basis of caste.

When the Mandal Commission report was implemented in 1993, there were 1,663 OBCs in the list.

In 2011, a caste census was conducted by Dr Manmohan Singh’s United Progressive Alliance government, but that report was never published.

Nitish Kumar’s move to conduct a census of castes in Bihar is interpreted by some political observers as as a way to halt the Bharatiya Janata Party’s Hindutva-propelled election momentum.

Does a census of Hindu castes matter in the 21st century?

How do you see the Bihar government’s decision to conduct a caste census?

It is a great social step. It was (last) done before Independence and it was easy to identify backward classes like dhobi, barber and fishermen etc who were socially and educationally backward.

When Jawaharlal Nehru, Indira Gandhi and Narendra Modi did not think of conducting a caste census, why is the Nitish Kumar government trying to do something which was not done in 75 years of Independence?

They were Savarnas and had Brahmanical identity.

They always wanted to rule India with this 15 per cent minority of upper castes.

But Modi is from a backward caste, isn’t he?

He is only acting as the Rashtriya Swayamsevak Sangh wants him to act. He has an RSS mentality who wants India to be divided between Hindus and Muslims. By doing so, he wants to rule OBCs through a Brahmanical order.

Moreover, let me clarify that the Mandal Commission never recognised Modi’s community (teli) as an Other Backward Caste (a socially and educationally backward caste). It was only Atal Bihari Vajpayee’s government that gave this recognition to his (Modi’s) community.

What problems will this caste census fix which has not been fixed in 75 years?

Other Backward Castes want proper representation across different fields of work and education in India. They are demanding representation, and not reservation. India is a democracy and therefore, they have a right to demand representation in the government in different respective fields.

Why did the government discontinue the British practice of conducting a caste census?

Dr Ambedkar was all alone to fight against the Brahmanical mentality after India’s Independence. He alone got political representation for Scheduled Tribes and Scheduled Castes, which was mentioned in the Poona Pact of 1932 (The Poona Pact between Mahatma Gandhi and Dr Ambedkar gave representation to Dalits within the Hindu electorate rather than as a separate electorate).

It was accepted in a newly independent India. He could not succeed in getting an OBC caste census, but got Article 340 into the Constitution which says a commission will investigate the condition of socially and educationally backward classes.

He also successfully got Article 15(4) which said ‘states’ can make special provision for the advancement of any socially and educationally backward class in India. In the 2019 general election, the regional parties got 26.4% of OBC votes, while the BJP got 44%. So, it is clear that Nitish Kumar’s move is directed by politics, to gain as many OBC votes as possible.

You know the BJP wins only by dividing Hindus and Muslims. They spend huge amounts of money in elections. This situation is worse than the Emergency of Indira Gandhi’s time.

But we already have 50% reservation and it looks like this OBC census is only a way to get more reservation for the OBC community.

You check the percentage of OBCs in the education sector and employment and you will get your answer.

OBCs are around 55 to 60 per cent depending on their population in each state of India. But they do not get even 15 per cent representation in the education sector and employment.

You take the example of the judiciary, 78 per cent of judges are from the upper castes, Backward classes, SCs, STs and OBCs put together are not even 15 per cent.

Just like there was a ‘Hindu awakening’ in the 2014 elections, are the regional parties trying to ‘awaken’ the OBCs to win elections?

Some OBC leaders are boot-licking all the time to get some position.

Has the movement for a national caste census begun?

The movement started when I was chairperson of the National Commission for Backward Classes (2013-2016). I made many recommendations to the Government of India and passed many resolutions for an OBC census, which I forwarded to the PM.

I also stated that we need to categorise every caste and sub-caste so that fruits of reservations should percolate to each and every community. I recommended reservation in national law schools, Sainik schools, central schools etc, which they have started giving now.

I read a report two years ago that 60 per cent of positions for OBCs at the Indian Institutes of Management were not filled.

It happens everywhere. Take the judiciary, where judges appoint themselves. As I told you earlier, 78 per cent of judges are from the upper castes. This kind of scenario is in every field of jobs and business.

The entire wealth of India is concentrated in the hands of a few privileged castes. They fear their caste privilege will be exposed if there is an OBC caste census.

Merit is only about getting a chance. And with better facilities for OBC students, they will surely shine.

Surendra K Patel was a beedi worker in India and went on to become a judge in Texas. He could do that because he got a chance to go to America, but in India, this would not have been possible due to his caste.

You see the criteria to join the Harvard School and you will find out marks is not the only criterion. There are various other things that you need to qualify to get admission in Harvard. Therefore, I say various factors constitute merit and not just marks. Getting top marks is not merit.