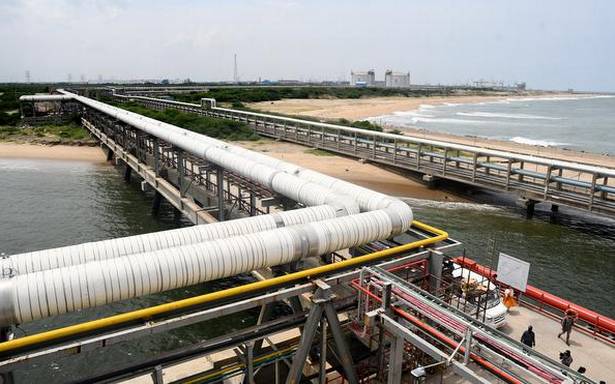 New demand for LNG from India is expected to support Asian gas prices which rose to record highs earlier this year, partly aided by the transition from coal or oil to gas in developing countries.

The 5-mtpa floating storage and regasification unit (FSRU), located at Jafrabad in western Gujarat, will be commissioned in April, said P. Sugavanam, director at Swan Energy and chairman of Swan LNG Ltd, which is developing the project.

The FSRU was initially expected to be commissioned in the first quarter of last year, but the pandemic and two cyclones have delayed construction of a breakwater needed to make it an all weather facility, Mr. Sugavanam said on Wednesday.

"The breakwater should be completed by March," Mr. Sugavanam said, adding Ghana’s Tema LNG is currently using the facility for storing LNG.

India, the world’s fourth largest LNG importer, wants to raise the share of natural gas in its energy mix to 15% by 2030, from the current 6.2% to cut emissions. Companies are investing billions of dollars in India to build gas infrastructure as Prime Minister Narendra Modi supports the vision.

Swan is setting up a jetty and will build more tanks to eventually double the LNG import capacity, he said.

ONGC earlier this year invited bids from potential suppliers for regular participation in its spot LNG buy tenders, according to a document.

Swan Energy owns 63% of Swan LNG, while two entities of Gujarat State government together have a 26% share. Mitsui holds11% and is also the technical partner on the project.