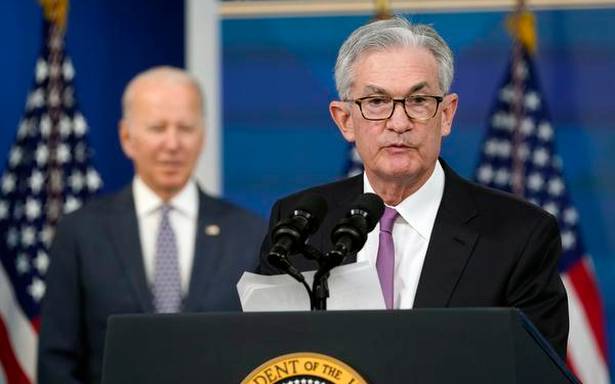 Indian bond prices fell while the rupee weakened on Tuesday, as investors raised bets that the U.S. Federal Reserve would stay on course for policy tightening in the middle of 2022 after the announcement of a second term for its chairman Jerome Powell. The rupee was trading at 74.51/52 per dollar by 0600 GMT, after touching 74.5725, its weakest since November 11, earlier in the session. It had closed at 74.3950 on Monday.

The dollar was near a four-and-a-half-year high against the yen while stocks and currencies in Asia’s emerging markets were mostly down, after Mr. Powell’s renomination for a second term as the Fed chief bolstered bets of a possibly quicker start to policy tightening in the U.S.

“The key theme over the coming quarters would be policy normalisation and there is arguably greater clarity under Powell,” economists at DBS wrote in a note. “He has turned incrementally hawkish since June’s FOMC meeting and kicked off taper in November,” they added.

For domestic bonds, the movement in global crude oil prices will also be crucial, due to its impact on inflation. Traders expect bond yields to broadly remain in a 6.3-6.4% range until the RBI’s monetary policy review in early December.

Oil fell on Tuesday, reversing gains from the previous session, on growing talk the U.S., Japan and India will release crude reserves to tame prices.

“Oil prices are muting the impact of Powell’s reappointment but a surge in oil could easily push the 10-year yield out of the current 6.3%-6.4% range,” a senior trader at a private bank said.