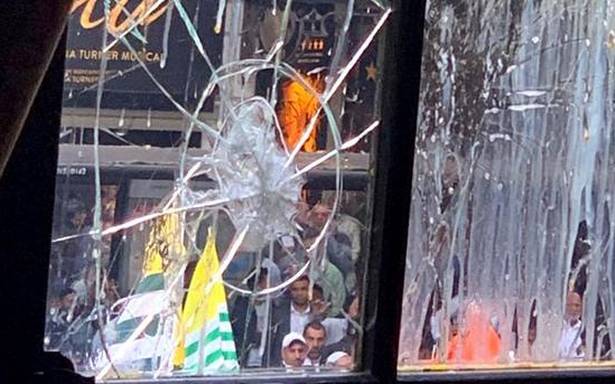 India and the U.K. countered each other over the violent protests at the Indian High Commission in London on Tuesday, where demonstrators surrounded India House and broke windowpanes.

While the New Delhi said it was “deeply concerned” over the “unruly demonstration by Pakistan-incited elements and consequent organised vandalism”, the British government called the protests “largely peaceful”. The matter was taken up in the British Parliament as well, along with questions over the situation in Jammu and Kashmir.

Sources said India had complained strongly both in New Delhi to the British High Commission, as well as to the U.K. government directly, about groups of pro-Pakistan and separatist Kashmiri and Khalistani activists being allowed to take out violent rallies against the revocation of Article 370 in Jammu and Kashmir.

In particular, India has been worried about the fact that protestors in large numbers are being allowed right up to the High Commission premises on the Strand in London, and released images of window panes broken, while crowds chanted on the road outside.

“This is the second time in a less than a month that such an incident has taken place affecting the security and the normal functioning of our Mission. We consider these incidents unacceptable and have strongly urged the Government of U.K. to take action against those involved, and take necessary steps to ensure the normal functioning of our Mission and the safety and security of our personnel,” the MEA spokesperson said on Wednesday.

The incident was condemned by London Mayor Sadiq Khan, who called the behaviour of the protestors “unacceptable”, and said in a tweet that he had raised the incident with Metropolitan Police to take action.

In a defence of the London police’s actions, the British High Commission said they had made two arrests in the matter.

The issue echoed in the British House of Commons on Tuesday, where Foreign Secretary Dominic Raab answered more than a dozen questions over the situation in Kashmir. In response to Conservative party MP Shailesh Vara’s question about the protests, Mr. Raab said, “Any violence is deplorable, and should not be conducted in [UK], or anywhere else for that matter, against any individual communities.”

To several questions from MPs that asked about reported detentions, and the internet and communications shutdown in Jammu and Kashmir, Mr. Raab said he had raised their concerns specifically with External Affairs Minister S. Jaishankar during a telephone call on August 7., and they were taken up at UN Security Council meeting on August 16.

“The reality is that there have been widespread reports and concerns about detentions, mistreatments and the communications blackout. There was a UN Security Council discussion on Kashmir on 16 August. As well as wanting to respect the constitutional arrangements within India and in relation to Kashmir, there are implications internationally, particularly as they touch on internationally respected and recognised human rights,” Mr. Raab added.