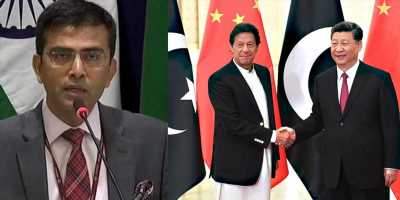 On to ongoing uncertainty of Jammu and Kashmir’s issue after revoking Article 370 and 35(A), the tensions between India and Pakistan are on the verge. According to the latest flash, India has turned down the joint statement of China and Pakistan and further opened up on the concerns over the China-Pakistan Economic Corridor (CPEC) illegally passing through the Pakistan Occupied Kashmir (PoK).

Indian Ministry of External Affairs (MEA) Spokesperson Raveesh Kumar said that Jammu and Kashmir is an integral part of India.

On questioning to this issue, the Ministry of External Affairs (MEA) spokesperson said that  “We reject the reference to Jammu & Kashmir in the joint statement issued by China and Pakistan after the recent visit of Chinese Foreign Minister.

J&K is an integral part of India”. He further expressed his views saying, “On the other hand, India has consistently expressed concerns to both China and Pakistan on the projects in so-called “China Pakistan Economic Corridor”, which is in the territory of India that has been illegally occupied by Pakistan since 1947.”