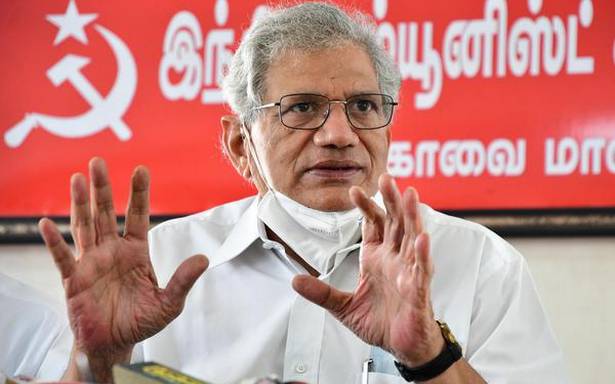 Communist Party of India (Marxist) general secretary Sitaram Yechury on Tuesday criticised the Central government for its alleged failure in planning the evacuation of Indians from Afghanistan much earlier, as the airspace was shut down following the takeover of the country by the Taliban.

Mr. Yechury arrived at Coimbatore for a two-day State Committee meeting of the CPI(M). Speaking to mediapersons prior to the meeting, he said that many countries evacuated their citizens after witnessing the rapid advances made by the Taliban in Afghanistan. “At least for 10 days or two weeks now, it was evident what was going to happen. What were our pre-emptive moves?” he asked. Describing the situation in Afghanistan as a “grave humanitarian problem,” he demanded that the Central government provide information on the steps taken to ensure the safety of Indian citizens there.

Mr. Yechury also alleged that India is seen as a “subordinate ally” of the United States of America. “The world must understand that it is not the fact why did the USA withdrew [from Afghanistan] so abruptly. The fact is that the USA should never have gone there,” he said.

Thee CPI (M) leader termed the Pegasus snooping row a “brazen destruction of Indian democracy” and claimed that the government’s response in the Supreme Court on Monday was an “admission that they have used” the Pegasus spyware.

Criticising the Central government’s move to observe August 14 as ‘Partition Horrors Remembrance Day’, Mr. Yechury said that India went beyond the horrors of the Partition by adopting a secular and democratic Constitution and that the government must focus on “strengthening” the Constitution further.

On the COVID-19 pandemic, Mr. Yechury claimed that it has now become “impossible” for the Central government to achieve its target of vaccinating the adult population by the end of this year as it would require the vaccination of “more than one crore a day” till December 31. “It appears that they (Central government) are inviting the third wave,” he charged, flaying the government’s alleged “mismanagement” of the pandemic.

He also urged the Central government to withdraw the excise duty hikes on petroleum products immediately. In September, the CPI(M) will organise nationwide protests along with other Opposition parties with a raft of demands “for people’s welfare and [to] control the pandemic,” he said.

Mr. Yechury also criticised the comments made by Finance Minister Nirmala Sitharaman on the Central government being unable to cut excise duty on petrol and diesel as it is paying back the cost of oil bonds issued to companies by the erstwhile UPA government. He claimed that the government earned ₹3.71 lakh-crore as revenue from excise duty in the financial year 2020-21 alone. “In the last seven years, the Modi government made ₹15.6 lakh-crores from these hikes in excise duty,” he said. These hikes were “the actual reason” behind the increase in fuel prices, Mr. Yechury said, demanding the withdrawal of the hike in excise duty “completely” to contain inflation.

Coimbatore MP P.R. Natarajan and Politburo member of CPI(M) G. Ramakrishnan were present with Mr. Yechury during the press conference.

08/17/2021 India Comments Off on India should have evacuated Indians from Afghanistan much earlier, says Yechury
India