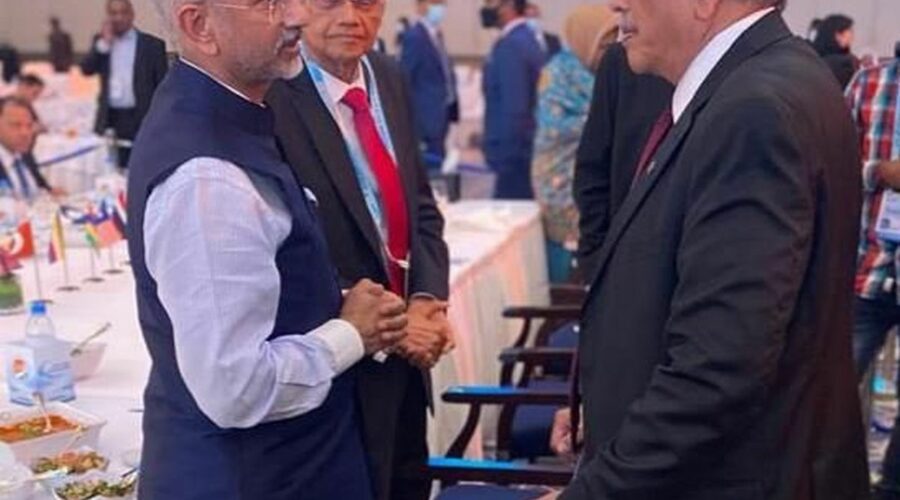 Whether it is Sri Lanka, Maldives, or Nepal, quietly but steadily, India has been reclaiming some of the ground it had lost to China, observes Aditi Phadnis.

With 2021 drawing to a close, as themes go, Covid dominates the horizon — the administrative hits and misses in handling it, the sense of loss and emptiness, impotence, and rage.

But the other story that dominated India’s consciousness in the year past was China. What it did. And how India responded.

There are myriad ways in which China has been asserting itself.

Of course, there is salami-slicing on the border, which, by the way, the Indian Parliament is yet to discuss.

The government had promised a discussion in the Budget session. The year is about to end but the country is still to hear from the government exactly how much territory the Chinese have claimed, whether India’s retaliation by banning a bunch of apps has deterred the Chinese government from its threatening military posture, and a quantification of how much Delhi has gained by staying out of the Regional Comprehensive Economic Partnership.

But one thing is clear. Whether it is Sri Lanka, Maldives, or Nepal, quietly but steadily, India has been reclaiming some of the ground it had lost to China.

It is employing two strategies: Ignoring gratuitous advice from television anchors; and making a sincere effort to win back the hearts and minds of not just governments in India’s immediate neighbourhood but the people.

Take Nepal. The year 2015 has to be the worst year in India-Nepal relations in recent times.

Prime Minister Narendra Modi had just taken over and his speech to lawmakers on his first trip to Kathmandu entranced Nepalis.

However, everything went down the tubes shortly thereafter.

The economic blockade of 2015 and New Delhi’s pusillanimity in accepting the 2015 constitution turned the tide of public opinion very rapidly against India.

China was a gloating beneficiary. But then, China made the exact same mistake India had: By becoming just too intrusive in Nepalese politics.

Singing Gorkhali folk songs on YouTube, Ambassador Hou Yanqi might have calculated, would help China dance into Nepal’s heart as the Chinese used danda and bhed to keep the Communist alliance intact.

But President Xi Jinping’s first visit to Nepal in 2019 told a country that no one has ever been able to colonise what China thought of it.

He is reported as saying there that anyone who dares to split China will be ‘crushed’ and those who attempt anti-Chinese activities will have “their bones shattered”.

The long and short of it is, there was a time when Chinese persons could be spotted in many village schools in Nepal, living with the locals and teaching children Mandarin. Those individuals have since decamped.

“They don’t come here anymore” was the succinct answer of a schoolmaster in Pokhara.

All over Nepal, Bhote — as Buddhist refugees of Tibetan origin are called — are quietly buying land and building gumbaS (places of worship).

Eventually, they will become — like the Madhesi — a powerful anti-Chinese force in the country.

And there’s more. In 2017, Nepal, which used to have 18-hour power cuts, is now in a position to export power to India (only 39 Mw, but it’s a start) and increase its power capacity as transmission lines are developed southwards.

To be sure, there have been tensions over incorporating India’s Kalapani in Nepali maps, which was legislated by a full House.

But Nepal is considering a methodology of conducting its 12th national census in that region: Without trespass of territory.

Thankfully, Indian news anchors are yet to get wise to this.

If there is talk of Nepal becoming a Hindu Rashtra, it is only a few Nepalis saying so.

In Sri Lanka, it is the Adani group — not the China Harbour Engineering Company — that will build the West Container Terminal.

The Indian ambassador in Colombo was present at every meeting Gautam Adani had with the president and prime minister of Sri Lanka.

That was followed by the inauguration of Kushinagar airport, where the chief guest was Namal Rajapaksa, MP, and son of the prime minister.

It was to India that Sri Lanka, with foreign exchange enough for just three weeks of imports, turned, not to China or (as yet) to the IMF.

For the first time in history, a unit of the Indian Army has signed an agreement to become a sister battalion of a unit in the Sri Lankan Army’s Gajaba Regiment, coincidentally, the president’s regiment.

And after a court cleared Opposition leader Abdullah Yamin (who was China’s torchbearer) of corruption charges, India will watch developments in neighbouring Maldives closely.

There are many in the BJP who feel they could have done the job of Foreign Minister S Jaishankar, a very new entrant to the party, much better.

The foreign minister might have felt compelled to overcompensate for the benefit of these elements when he departed from customary suaveness during his US visit to be publicly rude to Democrat critics of India’s human rights policy.

But at least in the subcontinent, there is a modicum of calm and balance.