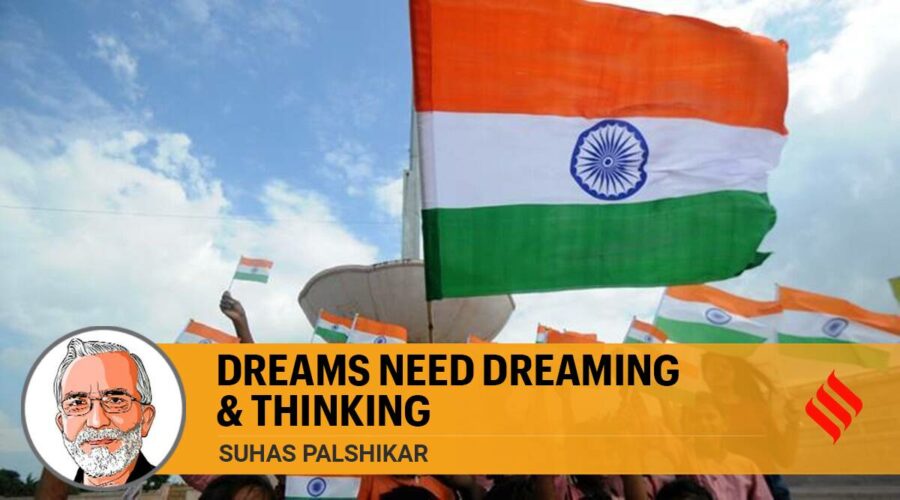 Suhas Palshikar writes: We mistook dreams for fulfilment and wandered onto the highway of denial and erasure. To course-correct, India needs a re-imagined politics. 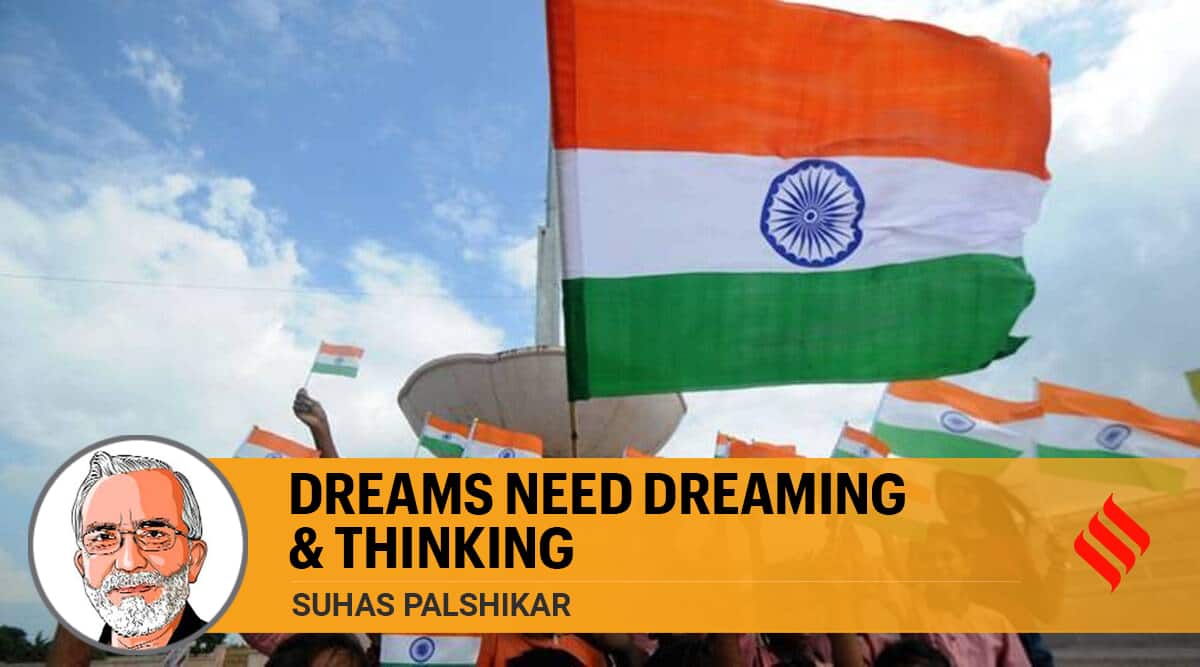 Can a society be made to give up its dreams and commitments? Seventy-five years is not a very long time in the journey of a society. It is neither long enough to fulfil dreams, nor to render those dreams irrelevant. So, if amnesia is effected, where does a society search for the foundation of its self-hood after giving up on both the historical and the modern beacons that guided it? India at 75 seems poised not merely to give up on its commitments made at Independence; it also seems willing to renounce its own historical moral riches and instead, to uphold an un-Indian approach to self-hood by giving up its lived inclusiveness.

Such drastic departures are identified through moments of rupture, but they are often shaped slowly. Analyses of India’s departure from the “tryst with destiny” will have to strike a balance between the deep cut caused by the regime change in 2014 and the invisible injuries from routine coups preceding that. Today, with the search for the “other” to demonise, we are on the verge of losing our own self. This predicament becomes all the more serious in its non-recognition.

India lost sight of its dreams through a combination of two routes. One is the false sense of “achievement”, and the other is being uneasy with itself. Anti-colonial struggle and the Constitution gave us the dreams, not their fulfilment. But we mistook the dreams for the fulfilment. This happened not just in the field of politics but also in the realm of ideas. Dreams require continuous dreaming, expanding the habit of thinking; but we converted dreams into convenient dead-ends in the art of thinking. We began thinking that democracy, welfare, nationalism, inclusion, were already in our grasp just by virtue of our being legatees of the dreams.

Side by side with this complacency, India lived through the politics of being uneasy with itself. If culturally we were uneasy with our innate plurality, socially, we were unwilling to accept that caste was a part that needed surgical removal. In the material sphere, we never got scandalised by squalor. While electoral politics allowed a sense of achievement despite many maladies, we remained deeply uneasy with democracy with respect to both political equality and individuality. The inevitable outcome was a state that neither cared for the dreams nor worked for their realisation. The single most deadly weapon India’s social and political practices produced, and which has strengthened the contemporary rupture, is the Indian state. No wonder, affection for the nation is being replaced by fear of the state. This means that the spirit of India could be swiftly crushed through an electoral coup but an electoral upset might not be sufficient for its rejuvenation.

At the dawn of the 75th anniversary of freedom, these complications have brought India to the crossroads where the choice and trajectory will be extremely complicated. There is the highway of denial and erasure. This road beckons us to hit the “delete” button on our dreams; invites us to redefine our selfhood in ways that are incongruent not just with the moral core of our anti-colonial past but also ill at ease with our tradition and history. It assures an image of ourselves seen through a cracked mirror. It has donned the costume of denial — it denies anything that we do not want to see. Its single-minded objective is to erase the dreams we saw 75 years ago and almost everything associated with those dreams.

But merely going back to those dreams is not a road that is available or advisable. The challenge is to pave a new road even as we keep using the by-lanes and recesses that we come across. This task involves resolute rejection at the intellectual level of the claims of the current regime, courage to simultaneously critique and question the past, ambition to dream but also caution to remember that politics is often about the less-than-ideal. Countering the regime that presides over the erasure of dreams is an urgent task but equally urgent is the task of searching within, for fresh dreams. We are at a deceptive crossroads where one road is visible, others invisible.

India’s journey over the next quarter of a century and beyond depends on whether three kinds of politics emerge, converse and converge. The first is the politics of normal opposition. There will surely be many parties competing for formal power, but the question is whether they will qualify as the “opposition”. Will they go beyond expanding their social base, increasing their vote shares, and aggressively defend democratic politics? At present, they are not even doing the former.

The second, even more daunting politics is the politics of civil society where little blocs of resistance and alternatives are continuously built, where interpersonal and intergroup relations are marked by democratic norm. If parties need to ensure democracy’s form, the social universe — the universe of our lived reality — has to keep alive the democratic norm. The third politics is of ideas. Though not independent of the previous two, conceptually this third arena needs to be imagined separately. In the erasure of democracy as well as of dreams, the bankruptcy of this politics has contributed a great deal. It has contributed, also, in our embracing the current road. An atonement is overdue.

What can this threefold combination offer? It can ensure a narrow field of possibilities in the backdrop of the current atmosphere of the finality of fate; it can postpone democracy becoming debris. It can save us from forced amnesia about the collective dreams of 1947. Above all, it can save us from pseudo-nationalism which is replacing our national self-hood. But is there even a whiff of these politics with us?

This column first appeared in the print edition on August 14, 2021 under the title ‘Dreams need dreaming & thinking’. The writer, based at Pune, taught political science and is currently chief editor of Studies in Indian Politics.