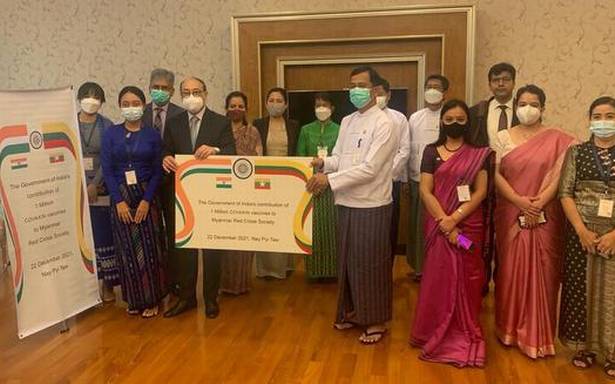 India on December 22 gave 1 million doses of COVID-19 vaccines to Myanmar. The doses were handed over by Foreign Secretary Harsh Vardhan Shringla who is on a visit to the country, the first by any Indian high official after the February coup.

“Foreign Secretary Harsh Vardhan Shringla handed over 1 million doses of ‘Made in India’ vaccines to the representatives of the Myanmar Red Cross Society to support the people of Myanmar, including those along the India-Myanmar border, in their fight against COVID-19,” announced the Indian Embassy in Myanmar.

Myanmar was part of the first few countries alongside Bangladesh, Bhutan and Nepal that received Covishield vaccine of the Serum Institute of India (SII) in January as part of the Vaccine Maitri initiative. However, the military junta ousted the elected government led by Aung San Suu Kyi on February 2.

The COVID-19 related preparations coincided with the political protests when doctors in the leading hospitals joined the spontaneous movement against the military takeover. Myanmar’s efforts to deal with COVID-19 was further set back when the military rulers charged 19 doctors with organising protests in April. The pandemic has claimed more than 19,000 lives in Myanmar and the healthcare sector is in a serious crisis because of the crackdown against protesters which has affected all spheres of life.

The Ministry of External Affairs said earlier Mr. Shringla will meet the State Administration Council, political parties and civil society outfits. He is also expected to take up the worsening security and humanitarian situation along the India-Myanmar borders during the exchanges.

Recent reports of increase in movement of narcotic substances and insurgency in northeastern India has heightened the concerns about the Myanmar crisis spilling over into India.