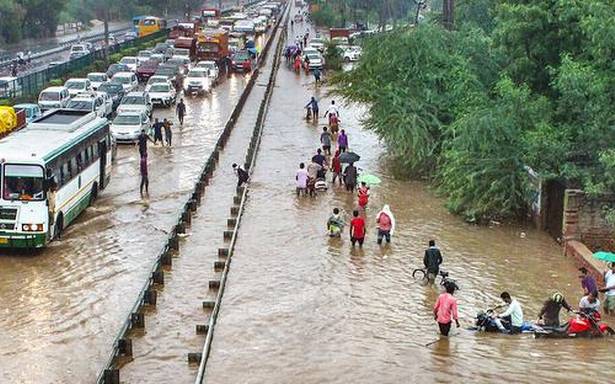 Incessant rains from the early hours of Monday till the afternoon wreaked havoc on Millennium City. While water gushed inside houses and basements in several parts of the city, heavy waterlogging was reported from roads, intersections and underpasses on the highway.

Meanwhile, water leakage through the roof of Ambience Mall forced the management to shut it down.

One person drowned in an underpass for non-motorised transport at Rajiv Chowk, said Assistant Divisional Fire Officer Gulshan Kalra. He also said a couple of houses on the verge of collapse in Naharpur Rupa village were evacuated.

The Flood Control Room set up by the district administration received 127 complaints of waterlogging throughout the day.

The district received a record 160 mm rainfall in less than 36 hours since Sunday morning, said the State Revenue and Disaster Management Department.

Temple officer Yogdutt Sharma said power supply to the shrine had to be cut to avoid any untoward incident after rainwater entered the temple premises.

Hari Om, 70, a resident of Sector 7 and vice-president of the BJP Zila Mandal, said: “When I woke up at 5 a.m., I found my house inundated with two-three feet of foul-smelling sewage water. I tried calling the helplines, but there was no response.”

The underpasses on the National Highway at Rajiv Chowk, Hero Honda Chowk, Medanta and IFFCO Chowk were also inundated. A senior NHAI official said pumps were installed to flush out stagnant water, but the heavy rains led to waterlogging. He claimed that underpasses were opened to traffic later in the day.

Besides, water leakage occurred at some points on the second and third floors of Ambience Mall.

“The Mall management decided to get all the electrical circuitry checked as a safety measure. The mall will reopen tomorrow [Tuesday],” said the Ambience Mall spokesperson.

The district administration said 113 pumps were installed at as many critical flooding points, and 32 suction tankers were deployed to flush out water from basements, besides pressing 14 excavators into service to deal with traffic jams on the roads.