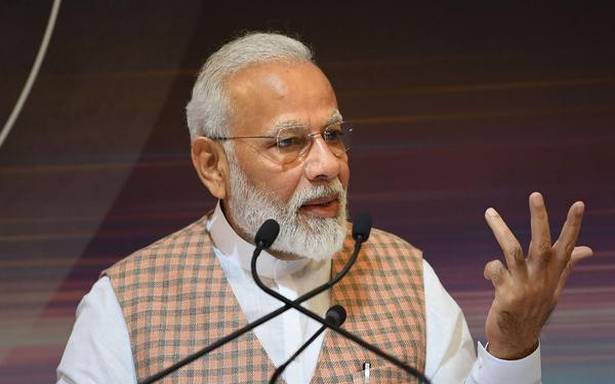 Asking people to shun single use plastic, Prime Minister Narendra Modi on Wednesday said the wanton use of plastic posed a hazard to the environment and had led to livestock and fish being killed.

Mr. Modi was addressing a gathering in Mathura after joining women in segregating plastic from waste at a ‘Swachhta Hi Seva’ programme.

The Prime Minister sat on the floor with women who pick plastic from garbage and helped them sift through the waste.

Mr. Modi, who is on a day’s visit to this Uttar Pradesh town, also launched the National Animal Disease Control Programme (NADCP) for eradicating foot and mouth disease (FMD) and brucellosis in livestock.

With 100 per cent funding from the Central government till 2024, the ₹12,652 crore NADCP programme aims at vaccinating over 500 million livestock, including cattle, sheep, goats and pigs, against FMD.

The programme has targeted vaccinating 36 million female bovine calves annually in its fight against brucellosis disease, a bacterial infection transmitted from animals to humans.

The programme has two components — controlling the diseases by 2025 and eradication by 2030.

During his visit, Mr. Modi interacted with farmers and also launched the National Artificial Insemination Programme.

As part of the “Swachhta Hi Seva” programme, the prime minister met 25 garbage workers. The women wore masks and a glove and responded to Modi’s questions on garbage generated from households and the amount of plastic in them. The women were honoured for their work.

Addressing the COP (Conference of Parties) to United Nations Convention to Combat Desertification (UNCCD) at Greater Noida two days ago, the prime minister spoke of India’s resolve to end single use plastic and urged other nations to embrace the cause as well.

“My government has announced that India would put an end to single use plastics in the coming years. We are committed to the development of environment-friendly substitutes and also an efficient plastic collection and disposal method,” Mr. Modi said.