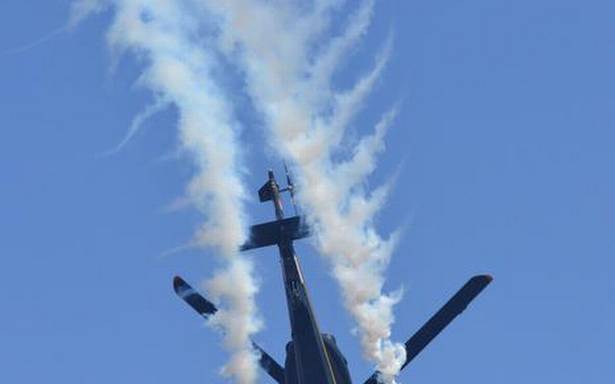 The Ministry of Defence (MoD) would formally dedicate a number of schemes to the nation from November 17-19 in events that were part of ‘Azadi Ka Amrit Mahotsav’ celebrations,” Mr. Kumar told the media.

The twin-engine LCH, designed and developed by Hindustan Aeronautics Limited (HAL), is a 5-8 tonne class dedicated combat helicopter. It is the only attack helicopter in the world which can land and take off at an altitude of 5,000 m (16,400 ft.) with considerable load of weapons and fuel, significantly augmenting the firepower of the IAF and the Army in high-altitude areas. It will eventually be deployed along the Line of Actual Control with China in addition to the AH-64E Apache helicopters in service.

The Prime Minister would also hand over the DRDO-designed and Bharat Electronics Limited (BEL)-made advanced electronic warfare suites to the Navy for installation on all front line warships, including aircraft carrier Vikrant, which is undergoing trials, Mr. Kumar stated.

In addition to the handing over of indigenous systems to the Services, initiatives to be announced include the laying of the foundation stone for a project costing Rs. 400 crore for the manufacture of propulsion systems of the Anti-Tank Guided Missiles (ATGM) by Bharat Dynamics Ltd at the Jhansi node of the UP Defence Industrial Corridor, the setting up of 100 new Sainik Schools that was recently announced, the launch of a National Cadet Corps (NCC) border and coastal scheme, the NCC Alumni Association, a national programme of simulation training for NCC cadets and the launch of a digital kiosk at the National War Memorial (NWM) to pay tributes to the fallen heroes through NWM mobile app.

Defence Minister Rajnath Singh would inaugurate the event on November 17 and Mr. Modi would launch the initiatives in a grand ceremony being organised in the precincts of the Jhansi Fort on November 19, which is the birth anniversary of Rani Lakshmi Bai, Mr. Kumar noted.

The ‘Rashtra Raksha Samparpan Parv’ was being organised by the MoD along with the Government of Uttar Pradesh.

The Cabinet recently approved the setting up of 100 Sainik Schools under public-private model. At least one such school is proposed in each State and Union Territory and these 100 schools shall be set up in the next two years, Mr. Kumar observed. “Norms in this regard are being finalised in consultation with all stakeholders. A stakeholder consultation is proposed on December 7, 2021, which will be chaired by the Raksha Mantri to finalise these norms,” he added.

11/15/2021 India Comments Off on In Jhansi defence events, PM Modi to hand over indigenous LCH to IAF
India