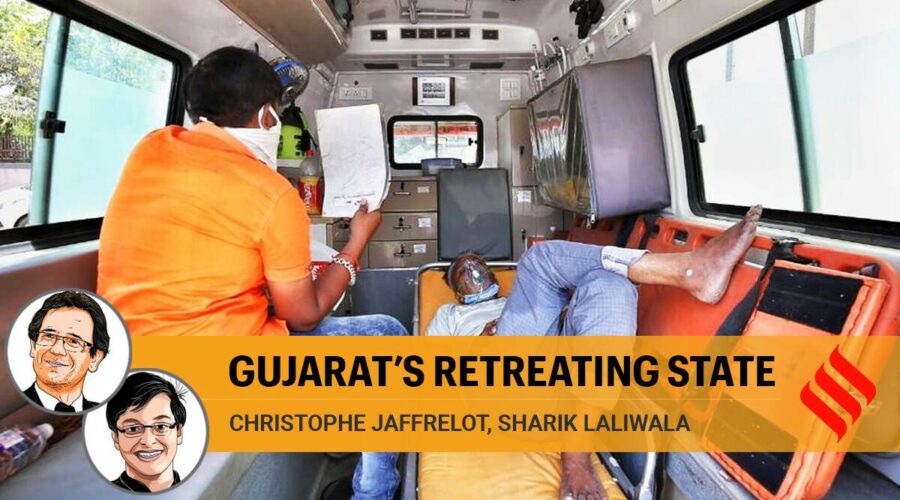 With less than Rs 5 allocated for daily healthcare expenditure per person in its budget, Gujarat fares badly on numerous health indices. 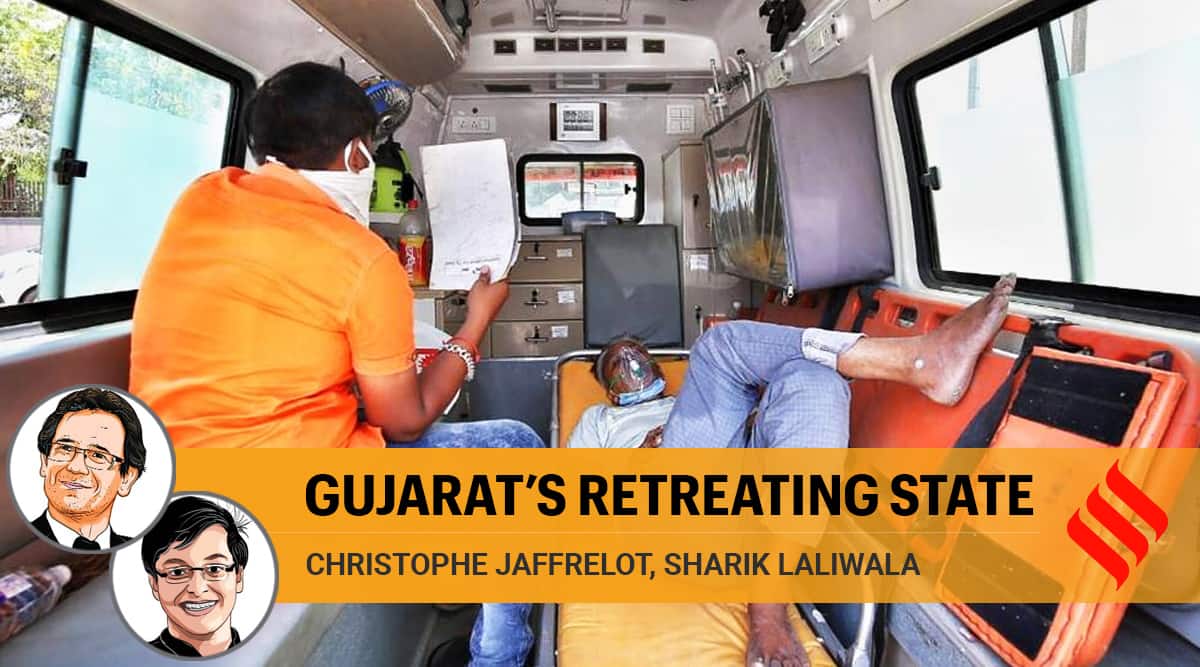 On March 3, 2021, Nitin Patel, Gujarat’s deputy chief minister, who is also the finance and health minister, congratulated his state government for having excelled at containing the COVID-19 virus while presenting the annual budget in the legislative assembly. He went off-track in his budget speech to note how other states kept patients in open grounds and stadiums, but, in contrast, none of that took place in Gujarat because of “our speedy decisions to ramp up health infrastructure.”

The government was high on confidence as the BJP had outperformed expectations in the local elections held a few weeks before. But the hubris was misplaced, since the second wave had started in February. By the first half of April, non-availability of hospital beds, life-saving drugs, and oxygen supply became an everyday sight in major cities across the state. Even the most privileged citizens — elites and the middle-classes — for whom Narendra Modi as the state’s CM carved out special concessions like tax breaks and land policies, were left to fend for themselves.

The malaise in Gujarat stems from a systemic problem that piecemeal augmentation cannot ameliorate — the retreat of the state from essential infrastructure and the privatisation of the health industry. In turn, it left the state organs unprepared to deal with the pandemic. Just in terms of hospital beds, Gujarat fares worse than most of India. Data from the Centre for Disease Dynamics, Economics and Policy show that there are 138 hospital beds in the country per one lakh population, while in the rich, industrial state of Gujarat, this number is below 100. Even socio-economically backward regions like Rajasthan and Uttar Pradesh have a better hospital bed availability with 123 and 130 beds per one lakh people respectively. The same holds for critical care beds.

Instead of filling these deficits, the government’s chest thumping in the budget presentation hid finer details. Even in times of the pandemic, the state government cut capital expenditure on public health infrastructure — as opposed to the budget estimate of Rs 914 crore, it spent only Rs 737 crore in 2020-21. The budgeted capital outlay on medical and public health is just Rs 856 crore in 2021-22 translating to less than Rs 150 per resident. It is lower than the budgeted figure for the same in socio-economically backward states like Bihar (Rs 2,437 crore). The total budget for Gujarat’s health and family welfare ministry stood at Rs 11,323 crore for 2021-22. In other words, the state government reserved less than 0.7 per cent of the state’s GSDP and fewer than Rs 5 daily expenditure per state resident’s healthcare. The percentage on healthcare services in the budget declined from 5.54 per cent in 2018-19 to 4.98 per cent in 2021-22 — far below the 8 per cent recommended by the National Health Policy.

The state’s withdrawal from the public healthcare system in the last few decades, a phenomenon that runs parallel with economic liberalisation, has put its track record on health indices in the league of the so-called BIMARU states. As per the NFHS-5 (2019-20), close to 80 per cent children in Gujarat under the age of five years suffer from anaemia. Not only is this figure worse than in Assam and Bihar, it is a jump of nearly 17 percentage points from that recorded in NFHS-4 (2015-16) when Gujarat was already performing worse than the national average of anaemic children. Almost 40 per cent of the children under the age of 5 years are stunted in the state. Amongst women aged between 15 and 49 years, 65 per cent are anaemic as per NFHS-5 (2019-20), a rise from 55 per cent in NFHS-4 (2015-16).

Gujarat is anything but vibrant on cumulative parameters of income, education, and healthcare as measured by the Human Development Index (HDI). Based on the Global Data Lab’s estimation, Gujarat ranked 23rd amongst 36 states and union territories of India in 1990. The high-growth trajectory of Gujarat under Modi’s chief ministership made no difference to this ranking. By 2018, the state was still at the 22nd position.

It was not always the case. Under Madhavsinh Solanki’s regime in the early 1980s, Gujarat experimented with welfare measures by improving access to education for SCs and OBCs, strengthening its public distribution system, and initiating mid-day meal programmes for school-going kids. However, it soon faced a backlash in the form of a political convergence of anti-reservation Patels and upper castes that resulted in the rise of BJP. The political discourse, subsequently, shifted from rights and emancipation to the law-and-order situation — given a grim history of Hindu-Muslim violence — and ethnic (sub)nationalism, leading to the folding of the then nascent welfare state.

Under a BJP dispensation since the mid-1990s, movements for rights are abhorred and questioning the state provokes repressive measures. Aspersions on the people and dissenters, which diverts attention from state responsibilities, continues even today in the face of the COVID-19 crisis. For instance, in the Gujarat High Court’s ongoing suo motu litigation to audit the COVID situation, the state counsel repeatedly chided the press for giving bad publicity and instigating fear in the minds of the public at large. Instead of correcting course, by building trust in the public, cabinet ministers in Gujarat, in their media interactions, blame Opposition parties for spreading anxiety amongst masses. Not a single all-party meeting has been called for, the kind that Kerala and Maharashtra have done to brief Opposition leaders and seek their views and support. Perhaps, it is not surprising that the destruction of an infant welfare state — which lies at the crux of its present inability to deal with the pandemic — took place at a time of “democratic backsliding” in Gujarat. The systematic underestimation of the number of casualties by the state reflects the same trend.

This article first appeared in the print edition on May 5, 2021 under the title ‘Gujarat’s retreating state’. Jaffrelot is senior research fellow at CERI-Sciences Po/CNRS, Paris, and professor of Indian politics and sociology at King’s India Institute. Laliwala is a researcher on Indian Muslims and Gujarat’s politics. He was previously associated with Trivedi Centre for Political Data at Ashoka University and Centre for Equity Studies, New Delhi

05/05/2021 India Comments Off on In healthcare, Gujarat is in BIMARU league
India