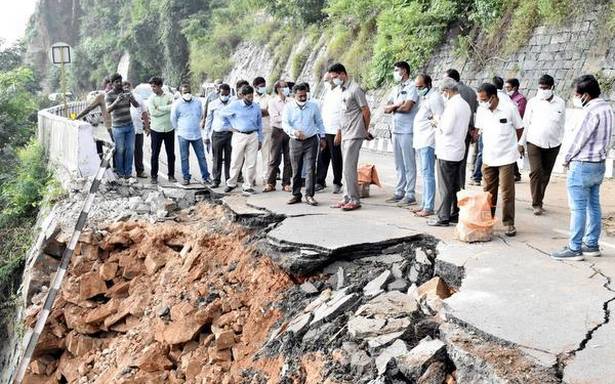 Experts from both IIT Delhi and IIT Chennai on Thursday inspected the Tirumala ghat road, which was badly damaged in the recent rains, and suggested various precautionary measures to be adopted to check the recurrence of landslips in future.

The team consisting of K.S. Rao and Prasad emphasised the need for developing channels to prevent stagnation and allow free flow of rainwater downstream on the Seshachalam ranges and the ghat roads.

After visiting the severely damaged road, culverts and parapet walls, Mr. Rao said that the latest technology had proved useful in checking the incidents of landslips in different parts of the country. The same technology was employed in the reparation works in 2017 when the ghat road was badly battered by incessant rains. Sensitive spots were identified and precautionary measures like fencing, rock bolting, shock treatment and construction of breast walls were taken up along the ghat road.

Falling of huge boulders each weighing between 30 to 40 tonnes from at a high altitude had nevertheless contributed to the present crisis, he said and opined that vehicular traffic could be regulated on to the link road connecting both the up and down ghat roads after taking up minor repair works at certain points.

Mr. Rao said that about five to six locations also had been identified to be more vulnerable for landslips and that would submit a comprehensive report with regard to the proposed preventive measures in the next couple of days.