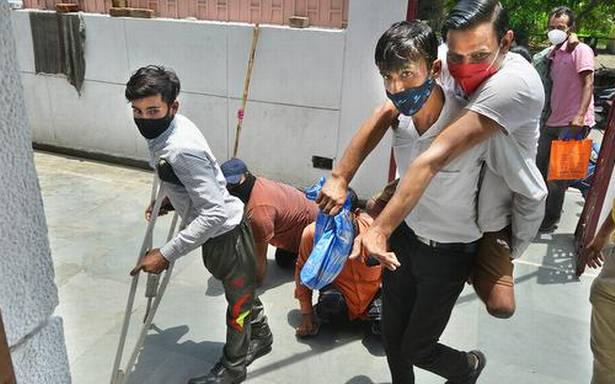 Chief Minister Arvind Kejriwal on Sunday requested Prime Minister Narendra Modi to allow doorstep delivery of ration of the Delhi government. The scheme was scheduled to be rolled out from this week but did not receive the go-ahead from the Centre.

In a digital address, Mr. Kejriwal questioned Mr. Modi and the Central government on the reasons behind rejecting the scheme, which he said, was going to end the rule of “ration mafia” that had victimised the poor of the country.

He said the Central government has said the scheme is being stopped due to a case involving ration shopkeepers in the High Court, but neither has the court stayed the scheme nor has the Centre put forward any objection in the court. Mr. Kejriwal said the Delhi government had taken the approval of the Centre five times and in spite of no such legal obligations of the government to do so to start the scheme.

‘Adhered to all demands’

“We adhered to all the demands of the Centre. You had objected that we cannot name this scheme after the Chief Minister, and we removed the name of the scheme. Our goal was not to make our name shine. We accepted all the objections you made. After all this, you say that we did not take your approval. How else to get approval, sir? Even after that, you rejected this scheme. Why sir?.” Mr. Kejriwal asked Mr. Modi.

He added that no government has dared to end the “ration mafia” and that the scheme would also help in the containment of the spread of COVID-19. “For the first time, a government has come to Delhi which has shown this courage. If this house-to-house ration system was implemented, then the ration mafia would end. But look how powerful this ration mafia turned out to be. This plan was to be implemented in Delhi from next week and a week ago, they got it rejected,” Mr. Kejriwal said.

Calling it a matter of national interest, Mr. Kejriwal asked why the Central government was fighting with States as they needed to come together to fight COVID-19.

“The Central government is fighting with Mamata didi, Jharkhand government, Lakshadweep people, Maharashtra government, Delhi, and with the farmers. People have started saying that the Centre is fighting the most,” Mr. Kejriwal said.

Beneficiaries under the scheme would have received 4kg wheat flour (atta), 1kg rice and sugar per person at the convenience of their homes as against the current provision of 4 kg wheat, 1 kg rice and sugar from fair price shops.

The new scheme would have enabled a person to get wheat flour instead of wheat. All the ration would have been delivered to the doorstep of the beneficiary in hygienically packaged form thereby cutting several trips for a common man to the ration shop and local miller, the government said.

06/06/2021 India Comments Off on If pizza can be home-delivered, why not ration, Kejriwal asks PM
India