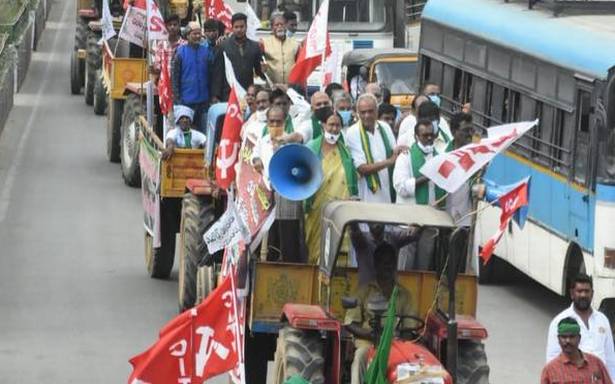 Narayana dares Jagan and Naidu to take part in the protest

Desecration of idols at places of worship in the State is a ploy to divert public attention from the agitation of farmers in Delhi, alleged CPI national Secretary K. Narayana.

Mr. Narayana drove a tractor at the rally taken out by the party here on Monday to express solidarity to the farmers’ agitation.

“The drama being enacted by the ruling and opposition parties is aimed at keep the public attention away from the farmers’ protest. It a joint ploy to protect their vote bank,” he said.

The CPI leader accused Chief Minister Y.S. Jagan Mohan Reddy, and the Leader of Opposition and TDP president N. Chandrababu Naidu of being ‘hand in glove with the BJP regime at the Centre to save themselves from the corruption cases.’

“The two leaders have merely expressed solidarity to the cause, but I demand them to come out in public and participate in the dharna if they are really serious about it,” dared Mr. Narayana.

The farmers would continue to protest until the ‘black laws’ were revoked, he added.