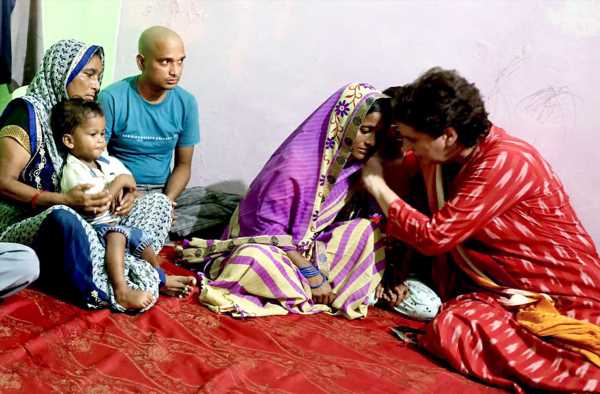 ‘I was not there at the spot and I don’t know who was driving the car.’
‘It is a matter that needs to be investigated by the police and it is their job,’ says the father of the journalist who was killed in Lakhimpur Kheri.

“My son told me that he was going to cover the farmers’ protest at Lakhimpur Kheri around 12 noon,” says Ram Dularey Kashyap.

“It was a very casual day and there was nothing unusual thing about that day except the fact that I never knew at 3 pm that he will die after coming under the vehicle owned by Minister of State for Home Ajay Mishra.”

Syed Firdaus Ashraf/Rediff.com speaks to the father of journalist Raman Kashyap, who was among the eight people killed in Lakhimpur Kheri on October 3.

I knew there was a protest programme of farmers, but no one thought that this incident will lead to violence and deaths that day.

My son was shooting the protest video on his mobile . Then his mobile video abruptly stopped as he was hit by the jeep owned by the minister.

I had no idea about this incident when it happened.

Around 9 pm, when he didn’t come home, his wife and children got worried and so did I.

I then went to the police station to report a missing complaint without realising that I will see his dead body.

I found his mobile the next day from the protest site and found out that before he died, he was shooting the protest when suddenly a jeep ran over him.

After collecting the video shot by different eyewitnesses, it is clearly evident that he was mowed down by the jeep.

Many people are asking me whether my son was mowed down by the minister’s son, and I have to tell them I have no idea.

I was not there at the spot and I don’t know who was driving the car. It is a matter that needs to be investigated by the police and it is their job.

As far as I know after the jeep turned upside down, protesting farmers lynched the driver.

What I feel bad that my son’s life could have been saved had the police taken him to hospital immediately.

Eyewitnesses told me the police did not do that and therefore he lost his life. The worse thing to happen to any parent if if he loses his son or daughter.

My son was a teacher at a private school and used to earn around Rs 7,000 per month. Journalism was his substitute income, but more than income he used to enjoy this profession.

I have three sons and he was the only one who was educated.

The other two sons of mine are into farming.

Since journalism was his passion, he used to take on assignments and do stories.

I do not have much details about his employment or his bosses.

We were happy with his work because he always worked on stories which gave justice to poor and highlighted their sorry plight in his reports.

I never knew journalism will take my son’s life.

Sadly, other journalists who knew him didn’t inform us about his death.

They were at the spot when the accident took place, but none of them had the courtesy to call us and inform about the incident.

The government has announced Rs 45 lakh as compensation to our family, though we have not got any money yet.

Sadly, the police have not arrested anyone in my son’s death and I do not know who is responsible for his death.

My only worry is about my deceased son’s family.

My daughter-in-law has got widowed.

My son has a 10-year-old daughter and a two-year-old son.

I don’t know at this moment what the future holds for them and me.