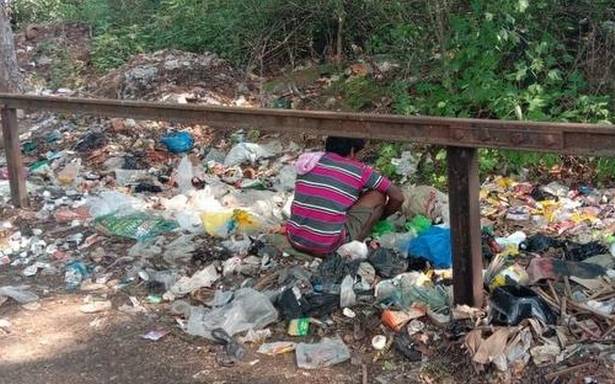 Thirty-five-year-old Raju, who was employed as a loader at a ginger farm, has had no work ever since the lockdown began. Unable to find sustenance, on Saturday he was found foraging for food in a waste dump yard at Kone Pete near Alur.

Sathish C.K., a resident of Chikka Kanagal in Alur taluk, spotted him on Alur-Bikkodu Road near Kone Pete. “I was on my way back from Alur when I saw him looking for something in the waste dump. I stopped my bike and went close to him. I was shocked to see him eating the food thrown out by hotels,” he told The Hindu.

Mr. Sathish stopped him from having the spoilt food and arranged for rice and sambar with the help of a local friend. “During the conversation, he said he had come to Alur to work on loading ginger bags at a farm. After completing his work, he could not return to his place because of the lockdown. He had no food or shelter. Some of his words were incomprehensible, but he was clear that he had had no food for the past four days,” Mr. Sathish said.

Later, Mr. Sathish contacted the Health and Family Welfare Department to get him tested for COVID-19. Anand, a building contractor of Alur, has come forward to offer Mr. Raju temporary shelter and food. “We will make arrangements to send him to his native place once the lockdown is relaxed,” Mr. Sathish said.

‘Not a one-off case’

Locals say they have come across many such cases. Akmal Javed, an activist, said, “I see many people struggling to get food every day. Many people have come to Hassan from distant places for small jobs. They work in the daytime and sleep in bus stands or on pavements. Nobody is bothered about such people.”

Indiramma, who runs a hotel with other women, said that four senior citizens used to visit her hotel regularly for breakfast, lunch, and dinner. “As they had differences with their children, they were having food outside three times a day. They preferred to have food in hotels to taking parcels. I am worried how they are managing now with all the hotels closed,” she said.

Last year, during the lockdown, the district administration, with the help of donors, had made arrangements to distribute food kits to the needy. This time, the authorities have not taken any such steps.