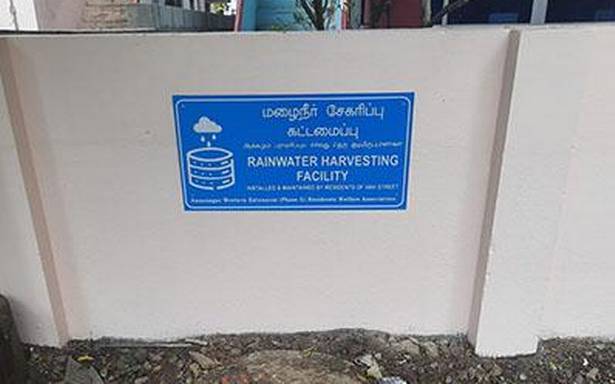 “The pit got ready two weeks ago and for the rain that we have received so far the system has fared well,” says N Prasanth, a resident of the street. However, the pit has to pass an acid test for the residents to see value in having more of them constructed.

There are 20 houses on the street and as the road has not been laid properly, it is therefore uneven and collects water.

So, residents warmed up to the proposal to construct a pit.

“Our 40-feet street is used by many vehicles including those heading towards Chennai Public School and other roads, so we wanted a long-term solution. Constructing a pit would also ensure that groundwater is recharged,” says Prasanth, adding that they informed the area engineer of the Greater Chennai Corporation about it.

He says the work amounted to ₹ 20,000 and came with cement ring, grill, a chamber and a seven to nine feet pit.

Prasanth says one of the residents agreed to nail a board on the walls of his house to say that it’s a rain water harvesting pit. “This was important as we wanted to send across a message to other areas that RWH pit is a simple and workable idea they too can implement,” he says. V. Rajagopal, president of Anna Nagar Western Extension (Phase II), says the street does not have a stormwater drain, so such a RWH arrangement will only stand to benefit every resident of the street. “They have set an example that through community participation, issues can be addressed,” says Rajagopal.