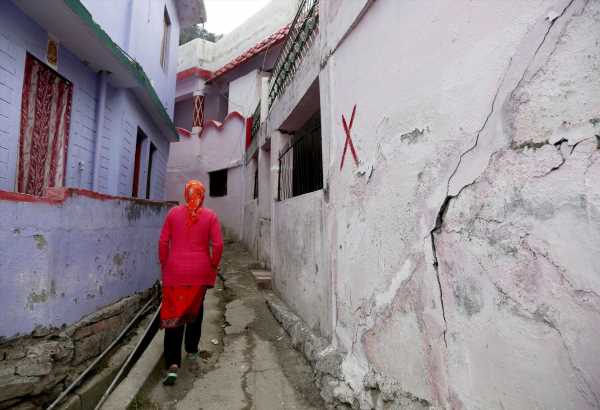 The PSInSAR satellite technique used to observe the gradual sinking of Uttarakhand’s Joshimath town is a powerful remote sensing tool capable of measuring and monitoring displacements in the Earth’s surface over time.

The Indian Institute of Technology (IIT) Ropar in Punjab this week said that its researchers had in 2021 predicted a large-scale subsidence in Joshimath.

The predictions ranged between 7.5 and 10 centimetres displacement for buildings in Joshimath which is enough to cause large scale cracks in buildings, IIT Ropar said in a statement.

A Synthetic Aperture Radar (SAR) is a form of radar that is used to create two-dimensional images or three-dimensional reconstructions of objects, such as landscapes.

“A signal from an SAR satellite interacts with different targets and goes back to the sensor located in the satellite, based on which an image is created. In our study, Sentinel 1 SAR satellite data was used,” said Reet Kamal Tiwari, Assistant Professor, Department of Civil and Environmental Engineering, IIT-Ropar.

“So, for active SAR sensors, the built-up structures such as buildings act as persistent or permanent scatterers,” Tiwari, who was involved in the yet-to-be peer-reviewed study, told PTI.

Scattering refers to a change in the direction of light because of its collision or interaction with another particle, say buildings.

The buildings are “scatterers”, and because they are usually static and do not record movements, they are referred to as “permanent scatterers” or “persistent scatterers”.

In PSInSAR, the persistent scatterers in question are imaged over a period of time at regular intervals. Therefore, successive images are acquired.

“Since persistent scatterers are not usually expected to move, therefore, any movement, even on a scale of millimetres, arising from crustal deformations or seismic activity or even structural failure is captured precisely,” said Tiwari.

“While we had been working on the same area but for the study of rock displacement as a result of the flash floods, we thought of applying the PSInSAR technique to study the displacement of buildings over time as well,” said Tiwari’s then PhD student Akshar Tripathi, who was also involved in the study.

Joshimath, being only 15 kilometres away from Tapovan, was captured in the satellite images, enabling the scientists to go back in time up to January 2020 and look at all the data, this time to study the surface displacement of the town.

The scientists then used this remote sensing data along with artificial intelligence (AI) algorithms to predict the land subsidence in Joshimath.

“Initially, we ran 16 images received using this PSInSAR technique from January 2020 to April 2021 through a machine learning model and predicted the displacement to go up to 8.5-10 centimetres in the near future. This figure is enough for cracks to develop in buildings, possibly even cause structural failure,” said Tiwari.

“Currently, the displacement figures may even be more and could be analysed in greater detail because every 12 days, more data is being added with successive satellite passes and ground displacement happening steadily,” said Tiwari.

A study by ISRO’s National Remote Sensing Centre (NRSC) shows the town of Joshimath sinking by up to 8.9 centimetres between April and November 2022. This recorded displacement falls within the range predicted by the IIT Ropar study.

“The displacement map from the study shows that the subsidence is maximum in areas with settlements and around the Narsingh temple area,” added Tiwari.

So, what exactly is land subsidence and how does it differ from a landslide?

Land subsidence is when the normal ground itself starts sinking or gets displaced all together. On the other hand, landslides occur when a mass of rock located at higher elevation falls down on a lower surface or road either due to slip action or under influence of gravity.

“Land subsidence is the slow settling of ground over a large area, which can happen in plains as well. However, in a landslide, a mountain slope fails due to different reasons, one of them being heavy rainfall,” he added.