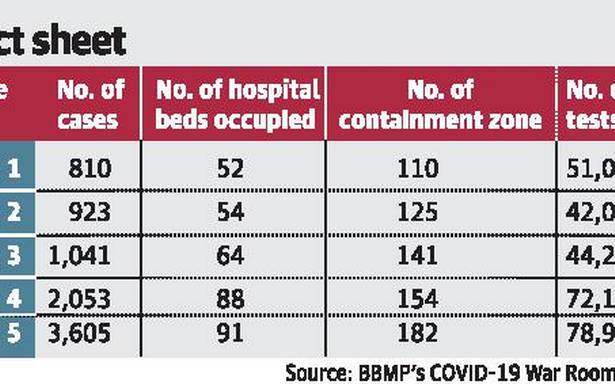 Civic chief says 95% of infected can recover with home isolation

The number of COVID-19 positive cases has seen a substantial increase in five days in the city — from 810 on Saturday to 3,605 on Wednesday. However, the rapid increase in cases is not commensurate with the number of hospitalisations.

This positive aspect is being attributed to not just the weakened virulence of the COVID-19 virus, but also the wide vaccination coverage of the eligible population.

Bruhat Bengaluru Mahanagara Palike’s (BBMP) Chief Commissioner Gaurav Gupta said that experts had opined that 95% of those who contract the virus can recover under home isolation, without the need for any major clinical intervention.

According to BBMP’s COVID-19 War Room reports, the number of hospitalisations (since January 1 to 5) increased from 52 to 91. There are a total of 1,926 beds (general, High Dependency Units, Intensive Care Units, ICU- ventilator) in four government medical colleges, 16 government hospitals, and two operational COVID-19 Care Centres (managed by the BBMP). As on Wednesday, there were 1,835 beds available in these medical facilities.

Mr. Gupta claimed that there were around 300 persons with COVID-19 who were admitted in private hospitals. “Among those hospitalised, we have found that 90% are admitted in general beds, which means they do not require serious medical interventions,” he said, and added that the civic body would operationalise more CCCs to isolate those who are unable to be under home isolation for various reasons.

He also said that BBMP had also activated physical triaging at the ward level. “We are also keeping a close watch on the cases and the number of beds will be increased, if needed,” he said.

BBMP’s Chief Health Officer Balasundar told The Hindu that the civic body had drawn up an escalation matrix, which had been shared with the different zonal commissioners. The escalation matrix helps the zones take appropriate action in terms of opening more CCCs, increasing testing and managing the staff pattern in either the CCCs, primary health centres, and war rooms. “This was done as part of the risk analysis management plan,” he said.

The civic chief also pointed out that to flatten the curve, citizens must mandatorily wear masks and avoid mingling. “Masking up cuts transmission of the virus, while vaccination prevents any complications in terms of clinical presentation,” he said.

01/05/2022 India Comments Off on Hospitalisation still low; no shortage of beds: BBMP
India