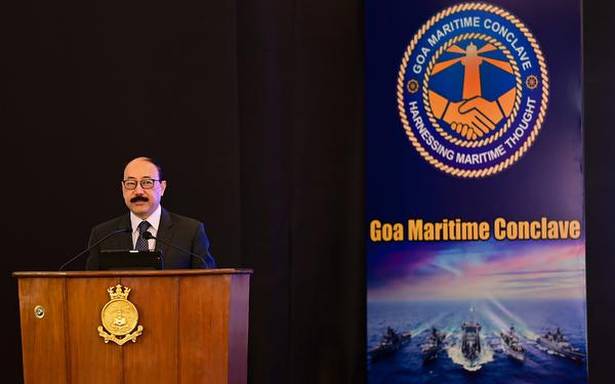 Unprecedented expansion of conventional navies can start a “new genre” of arms race, he says

Stating that to achieve high growth it is imperative to secure a free, open and inclusive maritime region where legitimate interests of all nations must be respected, Defence Secretary Ajay Kumar said on Monday India hopes that its maritime neighbours understand and are sensitive to India’s “legitimate maritime security concerns” and “unprecedented expansion” of conventional navies can start a “new genre” of arms race.

“While we talk of non-traditional threats, we cannot ignore the impact of expansion at an unprecedented speed of conventional navies in the Pacific. We are also witnessing enhancement of certain maritime presence and passages in our region, which may not be always be innocent. The negative effects of such rapid expansion are felt far beyond the Pacific,” Mr. Kumar said without naming any country. “Though it is early to conclude, such expansion has potential to trigger others to acquire additional capabilities and thus start a new genre of arms race.”

China has not only increased its forays into the Indian Ocean Region (IOR) but has also set up a base in Djibouti and is also expanding its Navy at an unprecedented rate.

Mr. Kumar was addressing the third edition of the Goa Maritime Conclave being hosted by the Navy. The Navy chiefs and heads of maritime agencies of Bangladesh, Comoros, Indonesia, Madagascar, Malaysia, the Maldives, Mauritius, Myanmar, Seychelles, Singapore, Sri Lanka and Thailand are taking part in it. The theme for this year’s edition is “Maritime security and emerging non-traditional threats: A case for proactive role for IOR Navies”.

Addressing the conclave, Foreign Secretary Harsh V. Shringla highlihted the joint coastal radar surveillance systems in coordination with countries in the region and other cooperative efforts. “We have worked and are willing to work with our partners on improving Exclusive Economic Zones (EEZ) surveillance.”

He said India has supplied equipment, vessels and aircraft to friends like Vietnam, Mozambique, the Maldives, Mauritius, Seychelles, Comoros, Bangladesh and Myanmar. “We are willing to work with partners in upgrading maritime hardware and software.”

Mr. Kumar said for a secure and prosperous future it is important to adhere to international rules and laws and understand each other’s interests and sensitivities and act accordingly.

While seas open the doors for economic progress, Mr. Kumar said the region is one of the most disaster prone areas causing enormous destruction. Listing out several instances where the Navy was the first responder in case of natural disasters, Mr. Kumar said the Navy will continue to work for Humanitarian Assistance and Disaster Relief (HADR) as the first responder and as a net security provider.

Mr. Kumar said India is in the process of making a Standard Operating Procedure (SOP) for dealing with disaster related situations in the Asia-Pacific which would be shared with all nations concerned. “We hope this will benefit our collective preparedness to deal with these calamities.”

Talking of various non-traditional threats such as piracy, maritime terrorism, armed robbery, illegal, unreported and unregulated (IUU) fishing, human trafficking, narcotics and arms trafficking which have a direct impact on safety and economic well being, Mr. Kumar specially referred to the growing challenge of IUU fishing which he said undermines national and regional efforts to achieve the goals of long-term sustainability and responsibility.

“Moreover, IUU fishing greatly discriminates against those who act responsibly, honestly and in accordance with rules. It is, mostly from outside our region, threatening marine biodiversity, food security for communities and the livelihoods of those involved in fishing.”

As reported by The Hindu earlier, there has been a growing incidence of Chinese fishing trawlers deep in the Southern Indian Ocean.

11/12/2021 India Comments Off on Hope maritime neighbours are sensitive to our security concerns: Defence Secretary
India