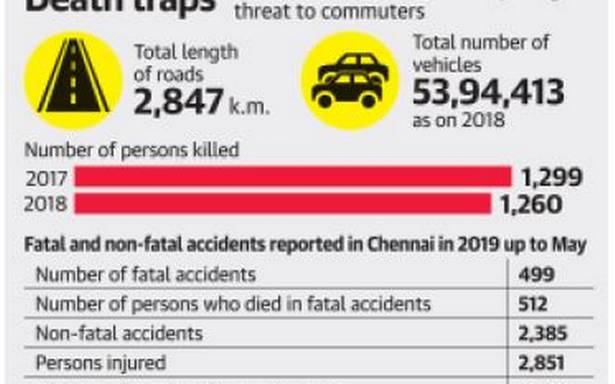 Wires, cattle, rubbish and encroachments leave carriageways and footpaths narrower, making it difficult for pedestrians and motorcyclists to navigate

For Mohammed Ali Jinnah, 31, the tragic end came because of a cable wire dangling from a post on the road. At 10.45 p.m on Thursday, the electrician was returning to his house in Hanuman Colony, Injambakkam, on his two-wheeler after visiting a friend. Near Akkarai on East Coast Road, the handlebar of his motorcycle unexpectedly got entangled in a cable hanging low. He died on the spot after he was thrown off and rammed into an iron median.

His brother, Abdul Gani, says, “Jinnah was the sole bread-winner of his family. His wife and daughter were eagerly waiting for his return, and only the sad news came home. Aren’t the officials responsible for this death? Negligent officials have allowed the cable operator to run the cable on the public road without bothering about the safety of road users. Even after the death of my brother, the cables remain there, tied on the top of pole again.”

No doubt, Jinnah’s case could be categorised as a ‘freak accident,’ the type of which is being frequently reported in the city. The true concern for the people of Chennai is carriageway and road space shrinking as encroachments begin to take up space — including dangling cables or poor maintenance of roads, shops, vendors, carts, parked vehicles, construction material and debris, garbage bins or hoardings take up road space. Also in areas where roads are dug up, poor repairs make the space unsafe for motorists and pedestrians alike. Clearly, encroachments on the roads narrow the carriageways and render them accident prone.

Private cable television and data providers have been erecting poles dangerously in the middle of road. In southern parts of city, cables are dangling overhead and poles are mushrooming on public space.

P. Saravanakumar of Madipakkam Social Service Trust said: “The public road space is definitely shrinking day by day thanks to these poles and cables crisscrossing and hanging low. Forget losing the aesthetic appearance of the residential areas, they are plain dangerous.”

Analysing the root cause of problems on the road space, V. Subramani, Traffic and Transportation Forum, reasoned: “All problems begin from the fact that this city does not treat its platforms with respect — as an inviolable space for pedestrians to walk safely. Even in the implementation of the smart city project in T. Nagar, the wider platforms are encroached by vendors and shop owners. Since the platform is being encroached upon by shop-keepers and street vendors, pedestrians have to walk on the road. This again reduces the space on the main carriageway, besides making it unsafe for them, leading to accidents.”

Most two-wheeler drivers in the city have to negotiate bumpy stretches, particularly in inner roads, and lanes, simply because authorities who dig up roads did not take adequate care to relay the roads properly.

While road cutting is regulated by the city authorities, there is no denying the menace does continue.

Vijay Metha, president of Citizen for Safe Roads, elaborated: “The Corporation digs the roads to construct stormwater drains, but the work is pending or not completed for months, resulting in the pits not being closed. Often, there is no cordoning of the dug-up area or barriers that will make sure road users do not fall in. For example, a pit has been dug on Perambur High Road near Don Bosco School but it has not been closed for months, posing a danger to motorists and children crossing the area.’

The poor design of roads and installation of speed breakers are other reasons for concern. T.A.S. Sundar, father of car racer Ashwin Sundar, who died a few years ago in a road accident, said, “I was told my son and his wife died after their car hit a speed-breaker on the main road in MRC Nagar. I suspect the speed breaker is one of reasons which led to the accident. Speed breaker should not be laid without proper planning.” International guidelines and Indian Road Congress guidelines exist to determine the gradient of speed-breakers and their placement, but they are often not followed by authorities.

Ravi Damodharan, president, Rutland Gate and Wallace Garden Residents’ Welfare Association, claimed that recently a speed-breaker was ‘unauthorisedly and illegally’ laid on Shafi Mohd Road. Despite repeated written complaints, it still has not been removed. We were told by the Chennai Corporation that the traffic police had given permission to lay the speed-breaker, whereas when we checked, the Sub Division , Range and District officers of Traffic Police have confirmed that they have not given even an NOC, forget permission. What is the truth here?”

If garbage bins stood in the road corners assigned to them, a number of accidents can be avoided, traffic experts claimed. However, moving the bins around or leaving rubbish strewn around while depositing the trash or while removing it, can be a cause for accidents. It is not uncommon to see cattle foraging amidst the garbage that has spilled around, blocking the road. Advocate V.S. Suresh explained: “The Corporation frequently impounds stray cattle and fines the owners. Over 1,270 cases were registered by corporation in 2018. However, there is no end to the cattle menace yet.”

Cattle cannot be left to wander on the city roads as per the Chennai City Municipal Corporation Act Sections 287 and 288 Tamil Nadu Public Health Act Section 44.

Another issue is with the timing and manner of conservancy operation in the city. Traffic police officers say they have repeatedly written to the civic authority to change the time of garbage clearance. R. Radhakrishnan, chairman, of Southern Builders Charitable Services said, “I have visited several foreign countries where garbage is being collected between 1 p.m. and 4 p.m. Whereas in our city, conservancy workers come with compactors and park in the middle of road even during peak hours to remove the garbage blocking the traffic. Several office-goers and road users are facing hardships daily while passing the stretches and have to wait until the compactor vehicle move from there.”

Despite repeated court orders on the issue, Chennai has not really seen the end of the hoarding culture. People often erect banners/ digital display boards on roadside, both on the pavement, and jutting out into the road way, posing a clear danger to pedestrians and motorists.

Social activist Traffic Ramaswamy said, “Even after the order of Madras High Court last December, several instances of illegal installation of banners/ digital display boards were reported. I personally went to remove some of them, with the help of police personnel and other authorities. Though political parties reduced their banners and hoardings to some extent, temple festival organisers and private individuals continue to install them. .”

K.P Subramanian, retired professor of urban engineering from Anna University, said: “The capacity of carriage ways is reduced by about half in the city, due to parking related encroachments; they impede the free flow of traffic and cause congestion and accidents. The Greater Chennai Corporation(GCC) adopted the Non-motorised Transport Policy in 2014. It retrieved many footpaths and widened them even further, reducing the carriageway with substantial investment. However, such widened footpaths have come in handy for encroachers and people looking to park their vehicles. Between themselves, the Corporation and the traffic police pass the buck in many instances, though they share responsibility. The former is the owner of footpaths and carriageways, while the traffic police are enforcers.”

Additional Commissioner of Police, Traffic A. Arun said, “We are taking action whenever we get any information. The city Corporation are removing encroachments on their own, and with help from us. Our personnel will act immediately and remove encroachment such as parking of vehicles on roadsides in commercial areas. We have removed vehicles parked permanently on side and widened the road to free up carriage way.”

Does anyone remain mute and without protest if his or her own property has encroachments? Traffic experts argued that unless both the government and the people of the take an interest in preserving carriageway and platforms, the scene is unlikely to change drastically.

They also advocate brainstorming, and insist that the problems require out-of-the-box solutions.