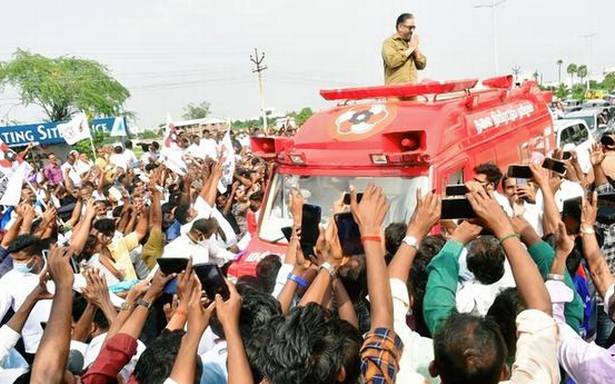 It is time for demonstrating real meaning of honesty in public life, says Kamal

Makkal Needhi Maiam founder Kamal Haasan on Sunday said people of integrity had joined hands to unseat the “corrupt government” and usher in an era of honest politics in Tamil Nadu.

Beginning his four-day election campaign in the central districts from Tiruchi, he said people of all walks, including industrialists and entrepreneurs, were fed up with the “corrupt and commission practices” of the rulers. Commission had become a regular phenomenon for everything. The time had come for demonstrating the real meaning of honesty and probity in public life. “The Assembly election will be a great opportunity to defeat the corrupt forces and bring about a change in government. People are waiting for it,” he said.

The actor-politician said he alone could not bring about the change. “It is the duty of every citizen who opposes corrupt practices to campaign for a new era of governance. A sense of togetherness to bring about the change must be construed as something similar to the gathering of pious people drawing a temple car,” Mr. Haasan said.

“It is an honest crowd [attending his rally]. No one is brought to the meetings. They come on their own to make an honest change in the State,” he said.

According to him, there was no concrete plan to eradicate poverty. The rulers had been cautiously keeping poverty intact by dubious means with an ulterior motive. The poor were being deceived with freebies. They were brought to polling booths. However, the rich, in spite of their awareness of various issues and the misdeeds of the rulers, chose not to exercise democratic rights, he said.

At a meeting of tiny, small and medium-scale entrepreneurs, Mr. Haasan said his party would strive to make the State a strong economy. If voted to power, his party would introduce measures to engineer growth and ensure a single-window paperless governance.

Travelling in an open vehicle, Mr. Haasan made a brief stop at Gandhi Market, Chathiram Bus Stand, Srirangam, Kattur and Thiruverumbur and sought the support of people for his party in the election.