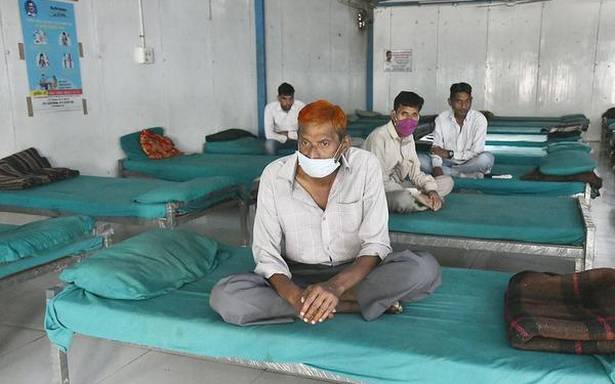 Shelter caretakers make lists despite no age proof for many, residents wait for doctors to reach facilities

At a west Delhi night shelter run by the Delhi Urban Shelter Improvement Board (DUSIB), caretaker Mohammed Jasin is facing two problems. In absence of any age proof of the homeless, he has to write down names of people eligible for COVID vaccination just by looking at them.

He also has to field questions by eligible recipients about when they will get the jab.

“I have a list of 14 eligible people but only three of them have an Aadhaar card. I drew the list just by looking at them. If they looked around 50 years of age or above, I wrote down their names and age. But even those who don’t have the identity proof deserve to get vaccinated,” said 24-year-old Mr. Jasin, a caretaker at the Raja Garden night shelter.

The list of eligible recipients was drawn up over two weeks ago and the caretakers were informed by their supervisors that doctors would visit the centre to inoculate the residents. They are still awaiting any action or further communication from the authorities.

Some wary of vaccine

Another challenge faced by the caretakers is convincing the residents that the “vaccination is safe”. Paramjeet Kaur, 60, and her husband Vinod Kumar, 70, have been staying at the shelter for the last three months. They had left their rented Shahpura house after a fight with their son and daughter-in-law.

Mr. Kumar used to drive an autorickshaw but had to stop due to old age. Both of them have age proof but while Mr. Kumar is willing to get vaccinated, his wife is scared. “Cases are rising and I am scared to step out of the shelter. Also, I am healthy, and I do not need vaccination. My immunity is not good, what if something happens to me?” she said.

“If the government is providing vaccinations, then we must get the shot. There is nothing to be scared of. If everyone gets the shot, we will too,” said Mr. Kumar.

In the men’s section of the shelter, 60-year-old Rajan Singh, who is blind, said he has been living in the shelter for the last 11 years while his family is in Punjab. “I don’t mind getting the vaccine if everybody gets it but how will I reach the hospital?” he said.

At a Tilak Nagar night shelter, 67-year-old Amarjeet Rana from Chandigarh said he has been at the facility for a year due to personal reasons. Speaking in fluent English, Mr. Rana, who cannot see due to retina dysfunction, said he was informed by caretakers that a team of doctors will visit them, but no one has come so far. “A doctor visits here twice a week. This week too, the doctor held a session to tell us that we should get vaccinated, but did not tell us how,” he said.

Caretaker of the shelter, Deepak Kumar, said he too had made a list of over 20 people who were eligible for vaccination, and had submitted it to his supervisor on March 17. He has also not heard back from the authorities.

Many here are also unaware of the vaccine. Soni, 45, and her daughter Mangli, 12, who had no idea about the vaccination, said: “I don’t know about any vaccine. I just pray that I don’t get infected.” She stays at the shelter with her three daughters.

Centre for Holistic Development’s Executive Director Sunil Kumar Aledia said the NGO has been working towards vaccinating the homeless in the city. He added that their teams are finding the absence of age and identity proof to be a hurdle.

“It has also been observed that some people living in night shelters are going for vaccination. But lack of post-vaccination care is a cause of concern with regard to consumption of drugs and liquor, and inadequate nutritious food,” he said.

Mr. Aledia said the CHD has drawn up a list of 1,500 people who are now eligible to get the jab. The organisation has also written to District Magistrates to look into the matter.

DUSIB member Bipin Rai said vaccination of eligible night shelter residents is likely to happen in the next 15 days. “They will be taken to hospitals for the vaccination,” he added.