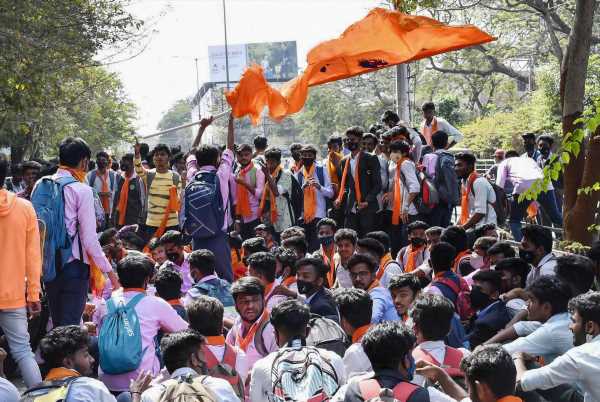 ‘Bommai’s predicament is pathetic right now because deep inside he is not like this, but to remain in power he has to talk and speak against his own conscience.’

Amidst the escalating controversy over hijab-clad girls being denied entry to colleges in Karnataka even while Hindu students protested sporting saffron shawls, the Basavaraj Bommai-led Bharatiya Janata Party government in Karnataka banned ‘clothes that disrupt harmony and public order’ in schools and colleges. But even this order has met with furore and protests.

Many Muslim girl students protested this decision wearing the burqa and hijab outside the gates of their schools and colleges.

Mahima J Patel, president of the Janata Dal-United in Karnataka, tells Rediff.com‘s Syed Firdaus Ashraf that “some MLAs want to rake up these issues by talking against a particular religion to become popular”.

What should the government of Karnataka do now that the controversy over the hijab is snowballing across the state?

As far as the government is concerned, one must know that some MLAs want to rake up these issues by talking against a particular religion to become popular.

They tell people to migrate to other countries and our representatives are not behaving responsibly.

We are living in a secular country and the leaders must not gain popularity by creating differences within society.

What is your opinion about the protests against wearing of hijab and ‘clothes that disrupt harmony’ in government schools and colleges? Do you think it was necessary?

No way. All governments are looking at surviving till and strategising to win the next elections.

This maybe their strategy because Karnataka assembly elections are due next year.

Creating such controversies and taking the side of the majority (community) was also the strategy of Adolf Hitler (in Nazi Germany) against the Jews.

I see some similarities between his speeches and what is being said and done in Karnataka as they are talking against only one community.

This is a way of gaining power.

A former party colleague of mine, B Somashekhar, who was the president of the Karnataka JD-U and is now in the BJP, used to say, ‘Our principles have to be our strategy. And strategising need not be our principle.’

Do you think banning the hijab in educational institutions was unconstitutional?

Muslim girls wear the hijab all the time. There was no point in banning the hijab.

This is not the way to run a society.

It is only a few people who want to gain out of such controversies who do these things and, unfortunately, the government is also becoming a part of these activities.

Take it from me, such governments won’t last long.

When Basavaraj Bommai became Karnataka’ chief minister, it was expected that he would be different, given that he was not part of the BJP and had socialist leanings in the past, was part of your party too.
But what he is doing is exactly opposite of what socialist leaders are expected to do.
Are you surprised?

When I met Basavaraj Bommai after he became chief minister, I told him that he has got the position, but he is yet to get the power of the CM.

The position of CM is different from the power of the CM.

He is in the position, but does not have the power. Power of CM is what Ramakrishna Hegde had, my father (J H Patel) had and even H D Deve Gowda had.

Thereafter, all the CMs of Karnataka were controlled from outside.

Bommai’s predicament is pathetic right now because deep inside he is not like this, but to remain in power he has to talk and speak against his own conscience.

Are you upset with Bommai on the personal front?

As I told you, he is in the position,but doesn’t have the power. I am not upset with him. I feel pity for him.

His father (the late S R Bommai) was a Royist (follower of M N Roy). Did the CM not pick up M N Roy’s philosophy of New Humanism?

He has to remain the CM and, therefore, he had to throw out his principles.

Only when you throw out your principles you can be in the position.

That is what is happening with him and I sympathise with him.

But it would be good for him if he really speaks his heart.

Who is controlling Karnataka now in this hijab controversy?

To an extent (the BJP) high command. But most of them are unaware of the needs of society and the wishes of the people.

These politicians are doing such acts to remain in power, and that includes the central government too.

Today, you take any government and you will find that for them, remaining in power has become a greater challenge than providing for the people.

The government’s job is not to give freebies to people but nurturing their potential.

They have to provide an environment to people where they can express themselves freely and bring out their creativity.

And today, creativity and freedom of expression are being suppressed by the people who are ruling.

Do you feel this benefits the BJP politically?

No way. People will lose interest in the hijab controversy after a week and you will see that some other controversy will be created. This will go on in future too.

Unfortunately, this is happening worldwide.

If you look at human history, you will find that early humans used to live in fear of their surroundings. Now that feeling of fear has transformed into anger.

And from anger, the next stage of development in human behaviour would be irritation and keeping quiet.

In future, humanity will have to move towards hope, believing that something good will happen. Humanity is working on that.

Democracy is not working today and we will have to look for a different system altogether.

Democracy came 2,000 years ago and in future, it will take a better shape because humans are always moving towards a better system.

If systems were to be the same, we would still be ruled by kings and emperors.

This controversy will run for a week and then people will forget about it.

You observe, any such news goes on only for a week. People will create halla gulla and forget because something new will come and their attention will be diverted.

You take Karnataka politics, India’s politics or even world politics, everybody is in a reactionary mode.

There is no pro-activity and nothing comes out of reactions.

This situation will also pass and something else will come up.

Just see how protests over the Citizenship (Amendment) Act and the entire issue died in two months. People don’t even think about it now.

In the same way, the issues of triple talaq and Article 370 went on only for some time.

Take my word, whatever is going on in Karnataka is restricted to big cities.

In villages, people are living peacefully and harmoniously. They don’t care about what is happening within the state government. The people need not give too much importance to governments.

But will you not say that the communal situation is worrying? Karnataka Home Minister Araga Jnanendra has blamed the girl students, saying that they started wearing the hijab ‘all of a sudden’.

02/09/2022 India Comments Off on Hijab Row: ‘CM Bommai has thrown out his principles’
India