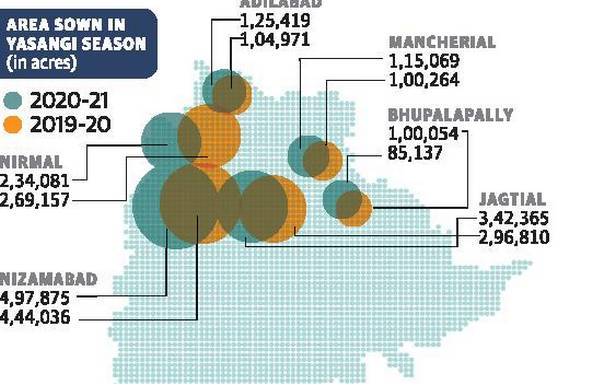 Crop cultivation on higher extent has impacted availability in six districts, it has decreased compared to last year

Cultivation of crops on higher extent this yasangi (rabi) season compared to the last rabi season has impacted the groundwater table, which otherwise is in improved position this March in the State compared to the same period last year, in six districts.

The depletion of groundwater table during the previous one month, between February and March, has been highest this year during the last six years.

The rabi crops are cultivated on over 16 lakh acres higher extent across the State as the total sown area was a record 68.15 lakh acres against 52.22 lakh acres last year. The extent does not include cultivation of vegetables and plantation crops.

In six districts where the groundwater table has gone down they are sown on higher extent by over 1.14 lakh acres.

Except in Bhupalapally, the actual rainfall in 2020-21 water year (June 1 to May 31) in the remaining five districst has been less than the normal, although it was normal technically as deviation up to 19% is considered normal.

However, the groundwater availability has improved phenomenally in seven districts in the range from 4.47 metres to 8.11 metres. The districts where the availability of the resource has become comparably easy include Narayanpet (4.47 m), Mahabubnagar (4.72), Vikarabad (4.94), Jogulamba-Gadwal (5.99), Medak (6.73), Rangareddy (7.93) and Sangareddy (8.11).

In Hyderabad it has improved by 2.27 metres with the average availability at 7.12 metres below ground level this March compared to the same period last year.

04/03/2021 India Comments Off on High extent of rabi aside, water table remains healthy in March in Telangana
India