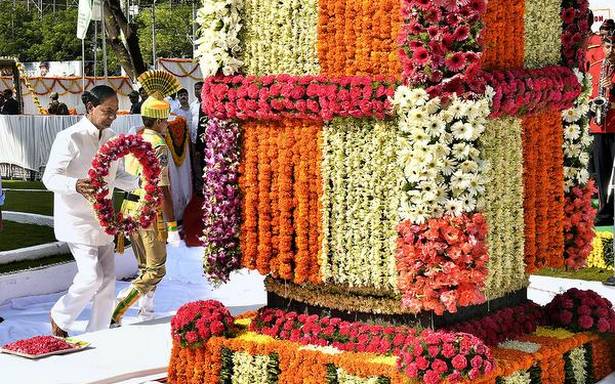 ‘System should be pro-active to realise our objectives’

The fifth anniversary celebrations of the formation of Telangana State were off to a simple start on Sunday morning with a call by Chief Minister K. Chandrasekhar Rao to people to strengthen the hands of the government in implementation of three new legislations in the offing, with focus on weeding out corruption in administration.

Mr. Rao told a gathering of invitees on the lawns of Public Gardens that “if we can rid corruption in these departments by getting new legislations with stable and strong resolve, the confidence and respect of people in institutions of administration will grow”. The departments — Panchayat Raj, Municipal and Revenue — were frequently accessed by people to meet their daily requirements. He recalled that the administrative system must be proactive for the objectives set for itself by the government to be realised at the ground-level. Unfortunately, the local bodies were rendered rudderless in Telangana owing to aimless policies of governments for decades.

The new Panchayat Raj Act, which the government would design redefining the functions of local bodies, would not spare officials and people’s representatives if they failed in their mandated duties to maintain sanitation and improve greenbelt. They would face severe punishment, even removal from their posts.

As regards new Municipal Act, he said it would have strict guidelines to prevent haphazard growth of towns and cities in these days of rapid urbanisation.

He expressed unhappiness that certain institutions continued to function although their intentions lost relevance. For instance, the revenue administration retained the same name even after it ceased to collect land cess. Collectors also went by the same name though collection of revenue was no longer their responsibility.