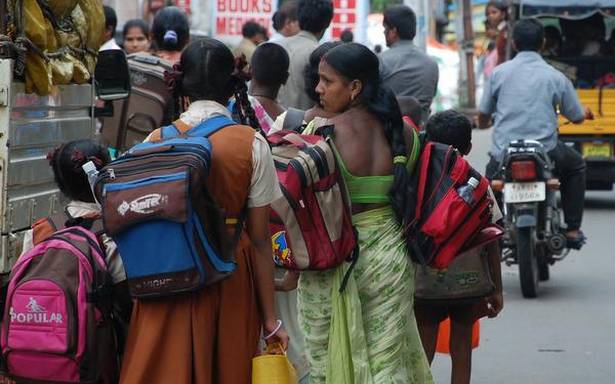 Parents being stifled by exorbitant annual fee hikes by schools

Despite the efforts of the Education department and the laws in place that regulate fee structure, a number of private schools in Visakhapatnam have already increased fee by 25%, which has almost become an annual practice now. Even in small schools, parents are being forced to shell out over 20% additional fee.

Several international schools in the city are charging up to ₹1.20 lakh even for LKG and UKG while medium-level schools in Madhurwada, MVP Colony, Seethammadhara and other areas are charging ₹25,000 to ₹45,000 annually for the first and second standard. For 10th class, anything between ₹70,000 and ₹1.20 lakh is being charged.

Further, many school managements have been collecting money from students for books, uniform and even shoes, in violation of norms. Parents allege that they are being made to pay higher than the market rates.

“For books, three pairs of uniform and shoes, they charge around ₹12,000 for my child who is in the third standard. For higher classes, they charge more,” says M. Aadi Kesavulu, whose son studies in a private school at MVP Colony. This apart, the school charges an annual fee of ₹35,000, he adds.

Another parent V. Apoorva laments, “Though we pay about ₹40,000 annual fee which is all inclusive, the school managements continue to demand more on the pretext of organising several events.”

“Sometimes we get a WhatsApp message from the school informing us, often a day before, that students should come in traditional attires as a traditional day is being observed. We then have to rush to garment shops to buy the clothes. Sometimes, they ask students to make projects, for which we have to buy all things. Then there are charges for picnics, excursions and other things,” says Ms. Apoorva.

According to another parent V. Uma Maheswara Rao, whose daughter is in the first class, parents had to go on a protest to force the school management to withdraw a decision to make it mandatory to buy books and uniform from the school.

Some school managements do not even hesitate to send away students by issuing a transfer certificate (TC), if they raise complaints, allege some parents.

Recently, parents staged a week-long protest following a private school in CBM compound deciding to increase fee. The issue went to the notice of the Collector and he directed the District Education Officer to sort it out. The issue subsided after the school management has dropped the decision to hike fee for this academic year.

“We questioned the practice of annual fee hikes, but the school management claimed it was unavoidable. When we protested, they advised us to shift our children to some other school. For various reasons including their busy daily routines, not many parents come forward to question the school managements,” claims K. Deepa, a parent and a resident of Beach road.

Defending the fee hike, J. Vishnu Vardhan, a management member of a private school in MVP Colony, says, “It is only to provide better infrastructure and facilities to students. Increase in the wages of teachers, staff and expenses on extra-curricular activities make fee hike unavoidable.”

What the norms say

As per the RTE Act, collection of a huge fee in the name of development and forcing students to purchase goods, bags etc. at higher prices on school premises amounts to violation of child rights.

Every district should have a District Fee Regulatory Committee (DFRC) to monitor the fee system, but nothing seems to happen in Visakhapatnam district. Even though parents had complained about the issue to former HRD Minister Ganta Srinivasa Rao and a few others, there has been no change.