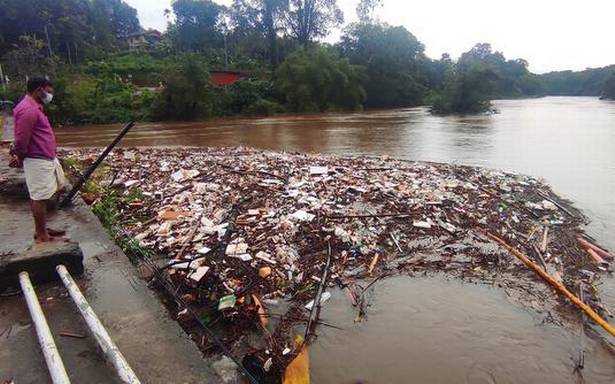 The heavy rain lashing the region since Thursday has brought Pathanamthitta district on the edge on Saturday.

The water level in all major rivers across the region recorded a steady rise. The floodwaters gushing from the upper reaches of the district have threatened to damage standing crops in low-lying areas. The torrential rain has ensured copious inflow to the dams in the district, all of which are close to the full reservoir level.

In Pathanamthitta, the Kakki forests received the highest rainfall of 106 mm in the 24 hours that ended at 9 a.m. on Saturday, followed by the Pampa region with 88 mm

The Kerala State Electricity Board Dam Safety Authority declared an orange alert for the Kakki-Anathodu reservoir with the water level reaching 977.04 metres by 7 a.m. on Saturday. In case of the water level reaching 977.45 metre, a red alert will be issued, and water will be released from the reservoir at a controlled rate after 8 a.m. on October 10.

The situation, however, is expected to change with a scheduled modification in the upper rule level, which stipulates the maximum water level in the reservoir to become 978.83 metres between October 11 to 20.

In view of the continuing heavy rain in the Sabarimala forests and the rainfall forecasts for the region in the coming days , District Collector Divya S. Iyer has urged the people living on both sides of the Pampa and the Kakkattar rivers to exercise caution.