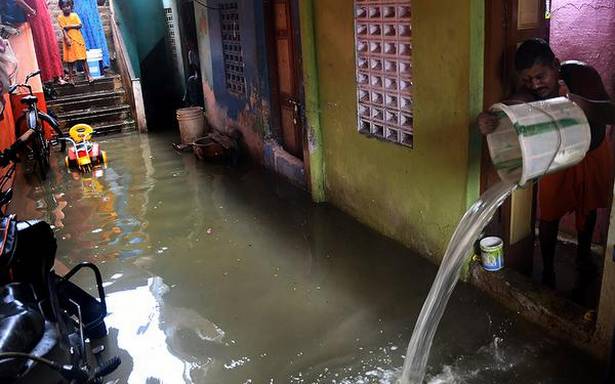 Persistent waterlogging, that too rainwater mixed with sewage, has dampened the festive spirit of people living in Prakash Rao Colony in Pulianthope. The residential locality has been experiencing frequent sewage overflow over several years, with the situation worsening following rains.

“It is Deepavali but we cannot wear new clothes and step out nor can children burst firecrackers due to the dirty water stagnating in front of our houses. In fact, water has entered many of the houses,” said Jagadesh, a resident. There are nearly 300 houses in the colony.

Amaravathi, who has been living here for over three decades, said each time the sewage overflows, they had to call the authorities to drain it. “The pipelines have not been replaced and the road has not been re-laid. If we use the water pumps at our homes, we get drinking water mixed with sewage,” she said.

“We have made several representations to the MLA, officials of the Greater Chennai Corporation and the water board. We have staged protests to draw the attention of officials but to no avail,” Mr. Jagadesh said.

Another resident pointed out that a ration shop and a private school were located in the area and waterlogging made it difficult to reach these places.

Viji, a resident, said that many residents had fever due to the unhygienic surroundings.

Residents explained that Prakash Rao Colony was a low-lying area and water from Decaster Road and Veerachetty Street flowed into it. “After a lot of struggle and several pleas, authorities put in place a motor to drain out the stagnant water. This has been lying here for nearly two months and is in need of repair,” another resident noted.

A solution in sight

Officials of the Chennai Metropolitan Water Supply and Sewerage Board (CMWSSB) said they were regularly draining stagnant water through lorries, motor and sucker machines, and had asked the Corporation to raise the level of the road.

An officer of the Corporation said that this was a long-pending problem. “There is no stormwater drain (SWD) here. A proposal to construct SWD has been sanctioned. However, work cannot be taken up during the monsoon. We will take up work after January,” he said.