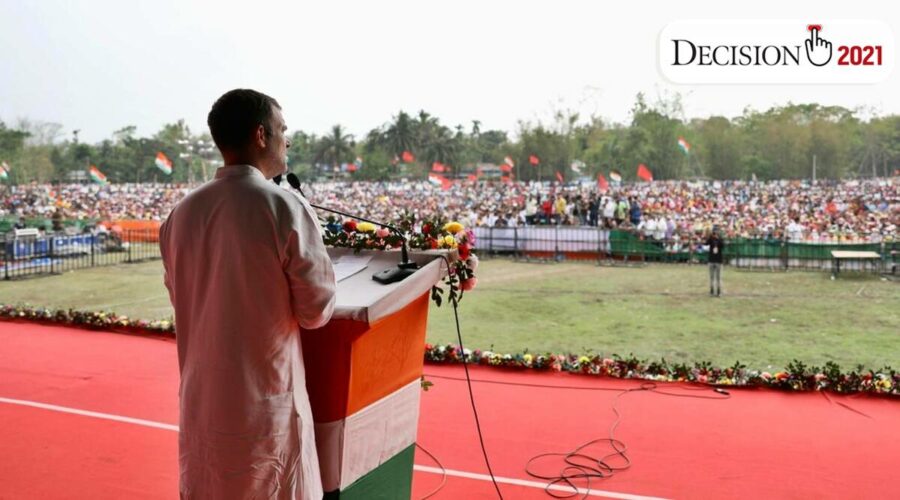 “I haven’t come here to lie. My name is not Narendra Modi,” Rahul said, addressing a rally in Chaygaon constituency in Assam’s Kamrup district. In Assam to campaign for the third phase of elections, Congress leader Rahul Gandhi on Wednesday claimed he was not a liar like Narendra Modi. “I haven’t come here to lie. My name is not Narendra Modi,” Rahul said, addressing a rally in Chaygaon constituency in Assam’s Kamrup district.

“He lies to India 24 hours a day. Switch on the TV if you want to hear him lie — whether it is about Assam or farmers or anything else. If you want to listen to the truth, come hear me out,” the Congress leader said.

The Congress manifesto for the Assam polls is topped by five key promises – a law to nullify the Citizenship (Amendment) Act (CAA), provision of five lakh government jobs, raising the daily wage of tea garden workers to Rs 365, providing free electricity of up to 200 units per household and Rs 2,000 in monthly income support to homemakers. “For residents of Chaygaon, Boko and South Kamrup, we will add a sixth promise, which is to fulfil your long-standing demand for a separate district,” the Congress MP said, adding that these were not “hollow promises”.

Citing the example of Congress-ruled Chattisgarh, Rahul said, “Before the (Chattisgarh) election, I promised to waive off farm loans in a rally like this. And within six hours of assuming power, we delivered.”

Lashing out at the BJP, Rahul said that if the Congress is elected, “Assam will run Assam — it will not be administered from Nagpur (RSS headquarters) or Delhi”.

Speaking at another rally in Barkhetri in Nalbari district, Rahul said that the five salient guarantees in the Assam manifesto did not come out of thin air. “We came to you, spoke to you, heard you… the women, the youth, the tea garden labourers, asking what we should do for Assam if voted to power,” he said, adding that if “Assam does not want the CAA, it won’t be implemented, come what may”.

At Chaygaon, Rahul spoke of Dipanjal Das, an anti-CAA protester from the area who was killed during the December 2019 unrest. “For no reason, the BJP and RSS shot him dead,” said Rahul, adding, “That bullet didn’t just strike Dipanjal, it hit the whole of Assam”.