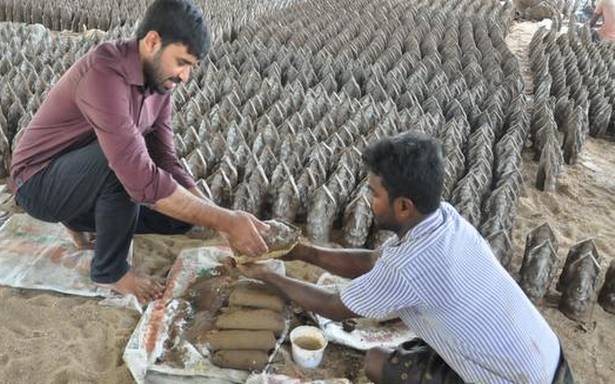 With the High Court giving permission for conduct of Vinayaka Chavithi festival in private premises by duly following the COVID-19 protocols, the huge idol makers of Bommala Colony on the outskirts of Tirupati are heaving a sigh of relief, but there is still confusion on how to distinguish a private place from public space and over the disposal of huge idols.

Huge idols made in this colony are sold even to the neighbouring States of Karnataka, Tamil Nadu and Telangana, to be erected in street corners and gated communities.

The idol business was almost on the brink of collapse when the State government hinted at slapping a total ban on public celebrations, but the court verdict exempting private places offered a respite.

Terming the verdict the ‘victory of Vinayaka’, Congress leader P. Naveen Kumar Reddy appealed to the MCT authorities to make arrangements at ‘Vinayaka Sagar’ for the immersion of idols.

Ahead of the Vinayaka Chavithi festival, various political parties, social and charitable organisations have come forward to distribute clay idols to the public to encourage them to go for eco-friendly alternatives and also to make them install the smaller idols at home, rather than gathering at street corners.

“The clay idols measuring one foot in height are designed with the intention of easy disposal (immersion) at the individual level, instead of making people gather at water bodies,” said Mr. Mohith Reddy.

09/08/2021 India Comments Off on HC nod for festivities in private places a relief, but confusion persists
India