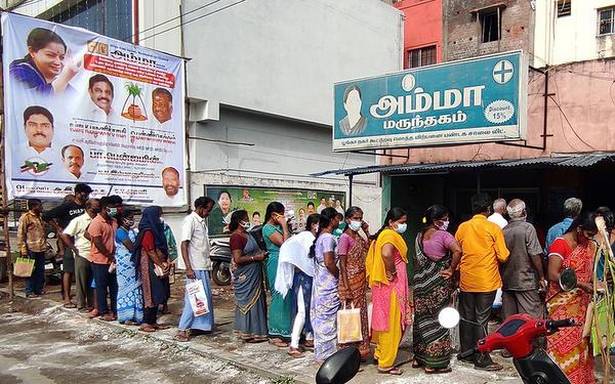 The Madras High Court on Friday directed the State government to ensure that no publicity material relating to any party is either displayed in ration shops or given along with Pongal gift hampers, comprising ₹2,500 cash, being distributed from the public exchequer to every family possessing a rice ration card.

Chief Justice Sanjib Banerjee and Justice Senthilkumar Ramamoorthy issued the direction on a public interest litigation petition filed by the DMK, complaining about the ruling AIADMK trying to gain political mileage out of the gifts being distributed at the State’s cost.

Senior Counsel P. Wilson played a few videos on his laptop to the judges and showed how ruling party pamphlets were being distributed in some of the ration shops.

On the other hand, Advocate General Vijay Narayan said that even the petitioner party had been claiming credit for the cash gift given by the government.

He gave an undertaking to the court that the State government would ensure that no leaflets or any other publicity material relating to parties would be either displayed in ration shops or made over along with the Pongal gift hampers. However, he sought exemption for the cloth bags in which the gifts were distributed.

The A-G told the court that the government had already printed the cloth bags containing photographs of former Chief Minister Jayalalithaa and Chief Minister Edappadi K. Palaniswami for distributing the gift hampers.

Recording his submission, the Bench said: “At this stage, it may not be feasible to require the bags to be replaced. In such circumstances, other than what appears on the bags in which the gifts are to be distributed, no other material indicating any party or the like should be made over to the recipients, along with the gift hamper, nor any leaflet or other political advertisement displayed within the ration shops or the precincts thereof.”

On complaints of the ruling party having erected flex boards, arches and cut outs too outside many ration shops, the Division Bench said they were indeed a cause of concern because they could lead to accidents. “Such materials cannot be put up at public places without obtaining permission from the local administration in accordance with law,” the Bench said.

Disposing of the writ petition, the Bench went on to add that the court order would “apply to all parties and their material” and that it should be implemented uniformly.