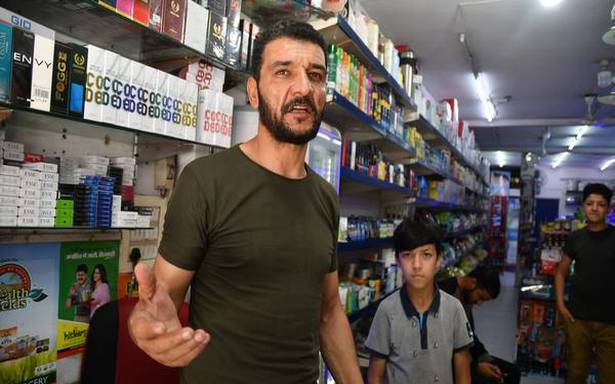 Students in institutions across the country have requested the govt. to extend visas

As visuals of fleeing residents dominate television screens, with the Taliban having effectively wrested control from the Western-backed government of Ashraf Ghani, thousands of Afghans in India including students across the country watch in fear for the future of women, children and young men.

For the 150 Afghan students studying in Osmania University (OU) in Hyderabad, following social media sites and watching TV news channels, the situation as it unfolds fills them with trepidation and concern. They don’t want to go back home and yet worry for the safety of those left behind.

“Don’t come back home now!” is the plea from Afghans to their sons and daughters in Hyderabad — a sentiment echoed by Afghan students in Hyderabad.

“I told my family I will not come back if situation there becomes hostile,” said a 22-year-old Afghan student who did not wish to be named. “We are worried about human rights, women’s rights, of our people. The Taliban are giving assurances, but only time will tell if they will stick to it. We don’t want to see what happened 20 years ago.”

Another immediate concern is about rising prices of food and other resources, and loss of jobs.

“Our families are not stepping out of home. There is silence now. But everyone is scared,” said Samiullah, another Afghan student pursuing psychology in OU. There are around 200 Afghan students in Telangana including 10-12 women.

Md Yousaf, president of the Afghan Students Association, said the visas of some students would exprie by the end of August and other at the end of the year. “We request the Indian government to extend the visas and provide some financial help,” said Mr Yousaf.

For many who had fled the Taliban, the nightmare has returned to haunt them.

The “Afgan colony” in Lajpat Nagar and Bhogal that has several grocery shops, medical stores, travel agencies and restaurants catering mostly to students, medical tourists and refugees from Afghanistan was abuzz with activity as people made enquiries about each other’s families back home. Matiullah, who runs a travel agency in the market says that over the past few days, he has been receiving hundreds of calls from Afghans living in India on how they can book flight tickets or secure travel documents to ensure safe passage of their family members to India.

“I cried all night thinking about the situation. My entire family is back home. I came to India nine months ago after my father who was a soldier in the Afghanistan army was killed by the Taliban outside our home,” said 24-year-old Matiullah. “The Taliban would come to our homes and shops if we were not at the mosque for namaz and women were not allowed to go out of their homes. Even wearing jeans, the pair of jeans that I am wearing right now was considered a crime. My country is now finished. I do not know what the future holds for Afghanistan or me. It has all happened so fast,” said a distraught Matiullah.

There are students stuck in Kabul who want to return to India. Ahmed Qasemi (name changed) is desperate to get back to finish his research work at the Central University, Kerala. “We now face an uncertain future and fear for our safety,” he said. With the Indian Embassy shutting down, the students are waiting for a window to escape. Qasemi along with others returned to Afghanistan during the first of the wave of the pandemic.

Omar Tariq, 22, at the Cochin University of Science and Technology sits glued to his TV screen worried about the fate of his family. Tariq is among the many Afghan students pursuing academic programmes in India as part of an initiative under the Indian Council for Cultural Relations. Students studying in Mumbai too, had returned home following the pandemic, and are now desperate to return.

Around 92 Afghan students studying in the University of Mysuru have requested the Director’s assistance in extending their student visas. Interestingly, out of 2,000 applicants from international students, over 1,300 belong to Afghan students.

The sudden withdrawal of the U.S. after two decades from Afghanistan has led to an exodus of people from their homeland fearing violent reprisal. Canada, Britain, Europe, Turkey are suddenly faced with the prospect of providing a safe haven for the fleeing refugees. India too will have to take a hard look at the looming crisis.

08/16/2021 India Comments Off on Haunted by history, Afghan nationals in India fear for kin
India