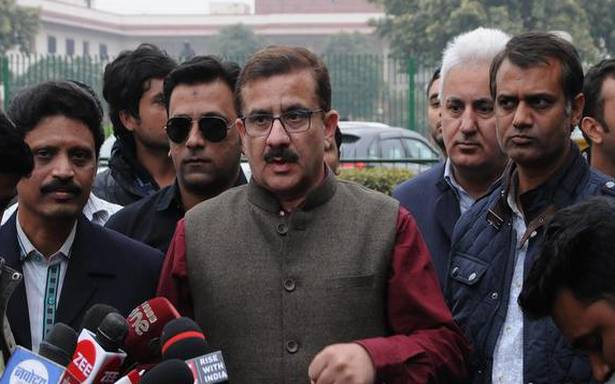 Event did not lead to killings, no explosives found, videos pulled down from Facebook, he says

A day after the Uttarakhand police registered a First Information Report (FIR) regarding a religious event in Haridwar where calls were made for violence against Muslims, State Director General of Police (DGP) Ashok Kumar said the hate videos had been pulled down from Facebook.

The FIR named Wasim Rizvi alias Jitendra Narayan Tyagi as an accused as it was based on a complaint filed by a local resident, who only mentioned “Wasim Rizvi and others”, he stated. The programme was organised between December 17 and 19.

The police registered the case under Section 153A of the IPC (promoting enmity between different groups on grounds of religion), entailing a maximum punishment of five years.

Mr. Kumar refuted that the case was registered under milder sections. He told The Hindu that sections of the Unlawful Activities (Prevention) Act, 1967 (UAPA) were not invoked as the act did not lead to any killings.

“We have invoked both Section (i) and (ii) of Section 153 A IPC in the FIR. We have to go by law, cannot invoke UAPA as the event did not lead to any violence or killing. The investigation will reveal further details,” he stated.

On being asked about children brandishing swords and tridents at the event, he remarked, “they are traditional things. They did not procure any weapon nor any weapon factory was found….it is all part of investigation.”

At the event, Yati Narsinghanand called on Hindu youth to become “Prabhakaran” and “Bhindranwale” and provoked Hindus to pick up arms against Muslims.

Mr. Kumar said they would call Narsinghanand and others seen in the video for questioning as per law. No arrests have been made so far.

Narsinghanand faces several FIRs in Uttar Pradesh and Delhi. Earlier this year, his comments about Prophet Muhammad at a press conference in Delhi led the police to file an FIR.

Mr. Kumar said the State police have also registered a case against Rizvi for objectionable content in a book he wrote on Prophet Mohammad. A former chairman of the Uttar Pradesh Shia Waqf Board, Rizvi recently converted to Hinduism at a ceremony endorsed by Narsinghanand.