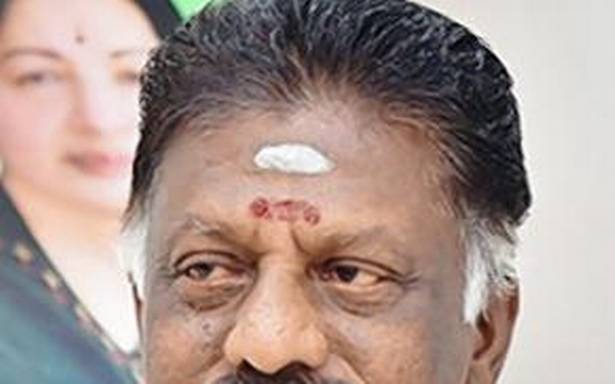 AIADMK coordinator O. Panneerselvam on Sunday urged Chief Minister MK Stalin to bring to book those behind the alleged harassment of a Sub Inspector of Police attached to Veppankuppam Police Station in Vellore district.

In a statement, Mr. Panneerselvam referred to an audio tape of a purported message by Srinivasan, a Sub Inspector of Police, alleging he was being threatened by ruling DMK party men that he should not register cases against a scam and illegal sand mining and had said he was about to end his life. “If a Sub Inspector if forced to this extent, I am afraid what would be the situation of the others," the AIADMK leader said.

During the past eight months, the dominance of "evil forces" was on the rise in the State, he charged and claimed that the audio of the policeman had only thrown light that there is threat to public harmony and inability of the police to function independently. “I condemn the atrocities and illegal act of the DMK partymen.”

Mr. Panneerselvam further insisted the Chief Minister to immediately stop DMK party men from threatening officials and police personnel to maintain the law and order situation in the State. He also demanded to bring to book those, who had allegedly threatened Sub Inspector Srinivasan and to avoid such incidents in the future.