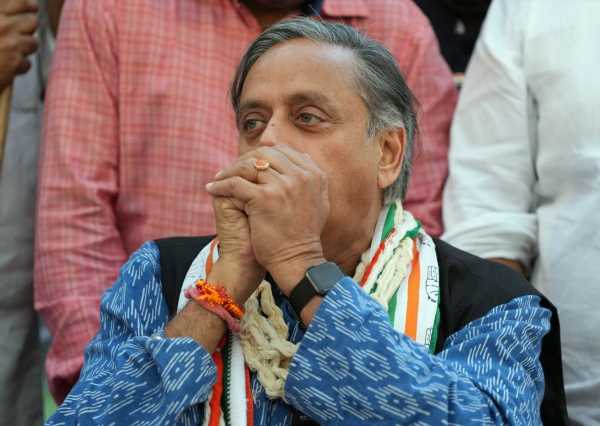 ‘I would like to see Kharge include Shashi in the Congress Working Committee.’
‘The other alternative is that the Congress will marginalise him.’

After Shashi Tharoor conclusively lost the Congress presidential elections, all eyes are on what future awaits him in the party after having gone up against the establishment’s candidate.

He has already been accused by Madhusudan Mistry, the Congress’s election in-charge, of being two-faced, with Dr Tharoor’s election managers saying one thing to him about the election process and another thing to the media.

“Shashi was willing to push the boundaries within the Congress. He had a plan to introduce democratic accountability within the party,” former Congress spokesperson Sanjay Jha tells Syed Firdaus Ashraf/Rediff.com.

Why did Shashi Tharoor lose the election, in your opinion?

He lost the election largely because it was a fait accompli.

He was up against the candidate sponsored by the Congress high command. And therefore, despite his excellent credentials, he stood little mathematical probability of winning because most of the 9,000 delegates who voted would follow a command or directive issued either subtly or overtly by the leadership in their name.

And therefore, (despite) Shashi Tharoor being an outstanding candidate, he lost inevitably.

What strategic error did he make by not wooing Congressmen to his side?

I don’t think he made any errors.

Shashi fought an exciting, transparent, campaign and an inclusive campaign, I would say.

He had a hashtag on social media for his campaign. He was prepared with his manifesto.

And here was the man who was willing to push the boundaries within the Congress.

He not only spoke about internal reforms in the party, but also ensured that he indeed had a plan of action to introduce democratic accountability within the party.

In my opinion, the initial response given by Madhusudan Mistry using very harsh words is extremely disappointing.

However, I do hope Kharge recognises that Shashi still got around 12 percent of the total votes.

And given the fact he had barely two weeks to reach out to people whom he did not even know, I think he put up a credible performance.

I would like to see Kharge include Shashi in the Congress Working Committee.

The other alternative is that the Congress will marginalise him. If they play a vindictive role, which I think will be unwise, imprudent and unwarranted.

Where is the rebel G-23 group now?

I am the sole member of that august group now. There is no one left as the G-23 has collapsed.

Many of them have left G-23 and the remaining have become proponents of Kharge.

They are happy with the status quo and many have chosen to be silent.

Although, I need to admire Karti Chidambaram for endorsing Shashi’s candidature.

Was Shashi aiming too high too soon as he has been in the party for only 15 years compared to Kharge who has been with the Congress for more than half a century?

I don’t think so. Look at Shashi’s credentials.

He was an international diplomat, one of the highest-ranking bureaucrats in the United Nations.

He is the author of the most eclectic collection of highly readable books which are well researched.

His speaking skills are legendary.

He is the youngest PhD and, more importantly, he is an outstanding parliamentarian.

He has won three Lok Sabha seats back to back in a constituency where the Congress is not a frontrunner.

And Shashi’s Hindi is much better than that of Kharge, to be very honest.

He was a very good candidate.

Had Shashi won, the Congress would have gained.

Nevertheless, one hopes that Kharge puts up a good performance and follows the agenda of the manifesto which Shashi has articulated.

What should Kharge do now?

He must first inspire the cadres of the Congress party as many of them are completely demoralised after successive defeats in general and state elections.

His main focus should be to hold elections to the block level where there is transparency and good people move forward so that the party becomes more energetic.

I don’t hold his age against him. US President Joe Biden will soon be 80 and Donald Trump, if he returns to contest the elections, will be almost 80.

L K Advani was trying to be prime minister around the same age and Prime Minister Narendra Modi too is not very young at 72.

In politics you become better with age, it is like wine.

If Kharge keeps himself fit and empowers other people in the party, like making five vice presidents in the party — for south, east, north, west and north-east. Bring in people like Shashi Tharoor, Sachin Pilot, Mukul Wasnik and give them important roles.

Also, get Priyanka Gandhi to play some critical role in the party.

What will be Kharge’s first challenge?

The proof of the pudding is in the eating.

Many people will say that winning is not everything, but in politics if you do not win, you do not get silver or bronze medals.

Only the winner takes it all in politics, and that is the gold medal.

And that is the reason Modi has become prime minister and India is seeing the rise of sectarianism, the rise of anti-minority politics and the fact that as a society we have become so fractured.

And, I think the ultimate shame is that Bilkis Bano’s rapists have been released.

I am very happy that Kharge after becoming Congress president tweeted on this issue and said ‘This is a shame’. This is the thing that India needs to wake up and do something about.

We need to ask questions. We need to be bold to question the political culture that has become very corrupted under the BJP.