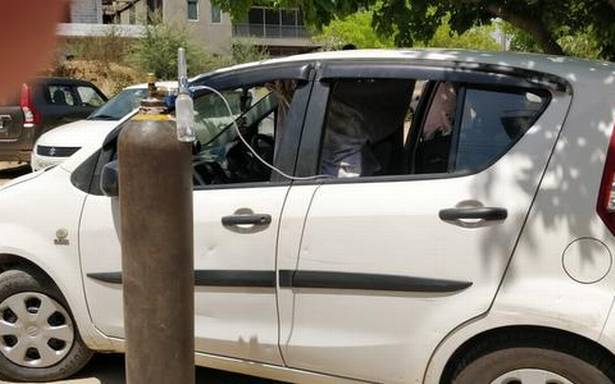 Under its ‘drive thru’ scheme, patients can use oxygen at the NGO office for free

Ritwik, a resident of Sector 56 here, panicked after his mother, Ritu (47), a COVID-19 patient, suddenly begin gasping for breath on Sunday afternoon. The oxygen cylinder at home too had exhausted earlier in the day putting him in a spot. However, a social media post about a non-government organisation in the city helping patients with oxygen supply came to his rescue.

“I had seen a post on the social media about Hemkunt Foundation helping COVID-19 patients with oxygen supply. The post said that a patient can avail of oxygen supply at the office of the NGO. So, my younger brother and I rushed to their office,” says Ritwik, who was relieved after having reached the said office in Sector 42 on time.

For more than ten days, the NGO has been “doing its bit” to bridge the gap between the demand and supply for liquid oxygen for COVID patients.

“People from across the National Capital Region and places as far as Ghaziabad and Palwal come to us for oxygen cylinders. We gave them the cylinders for a security deposit of ₹10,000. We refund the entire money after they return the empty cylinder,” says Mr. Jitender, refusing to divulge the source of liquid oxygen for his organisation. “I won’t reveal that,” he curtly replies to a query for the source.

He claimed that there was no help from the administration, but they were getting donations.

In view of the rise in demand, the NGO also started a “drive thru” scheme for patients to come to their office and inhale oxygen from the cylinders free-of-cost. “We have served 50-odd people since morning,” says Mr. Jitender.

The NGO was involved with the distribution of food to the “have-nots” during the lockdown last year. However, this year, in view of the growing demand for oxygen, they decided to help patients with supply of liquid oxygen. “We have around two dozen volunteers and staffers involved in the task round-the-clock,” says Mr. Jitender.

Sujeet Singh, a doctor, has also been offering his services as a volunteer. Mr. Surjeet said that patients coming to them are being given oxygen for 5-10 hours depending upon their condition. Dr. Surjeet, who also runs his own NGO, said many patients reaching out to them for oxygen are panic-stricken. “Many patients coming to us are in a state of panic. They don’t need oxygen, but feel breathless out of panic. They fear that they would die. The round-the-clock news on COVID cases causes anxiety to them. Good lung condition and stable mind are required to fight this pandemic,” says Dr. Singh.

Another volunteer Deepak Kumar, a Sector-43 resident, says that he has been working with the NGO for the past one year and decided to help them in this initiative too.